A few words on Nightbreed: The Cabal Cut: The Kitchen Sink Edition at Scary Movies 7 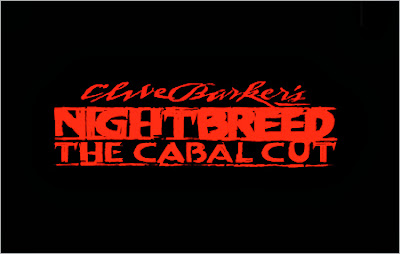 Nightbreed is the story of Boone (Craig Sheffer), a young man in love with a nice young girl. He had troubling dreams so he had gone to see a shrink named Decker (David Cronenberg). Decker is actually a nut job serial killer who hopes to pin his crimes on Boone and use him to find Midian, the place where monsters live. Decker's plans send Boone to the mythical city and set in motion a battle between humans and monsters.

The version screened Saturday night as part of Scary Movies was the now legendary Cabal Cut, which is an attempt to get the film back to what director Clive Barker intended. We were told that this version is the seventh version of the Cabal Cut. The film runs 45 minutes longer than the theatrical cut but actually has an hour of new material since the studio mandated footage was all removed. Its a version that puts in every bit of footage they have (its a mix of VHS and DVD) that fits in context. Its a version that will be trimmed for the eventual Blu-ray and DVD releases.

Seeing the film closer to what Barker intended it's clear that the film is less horror film than adventure fantasy. This is the story of how Boone comes into his own as both destroyer and savior of the Nightbreed. It's been too long since I've seen the original version of the film to say if it's better, though I will say it's different and very good on it's own terms.

Dealing with the film on it's own terms is often tough. The majority of the cut comes from VHS work print copies that Clive Barker had stashed away. The material is run down. Some of it borders on unwatchable. Because some of the new material was small clips a great deal of the VHS footage is used because it's wasn't worth constantly going in and out of various versions, they simply let the VHS prints run. (I think the fact so much is VHS lead at least one person in the audience to insist that much of the new footage isn't new and can be found in a cable TV cut. While it might be possible, the producer of the Cabal Cut seemed skeptical since this was the first time they ever heard of it despite years of searching.)

I've always liked the film a great deal and seeing it this way was a real kick. I'm not sure that  they are going to make a lot of new fans with it, but they just might. I say this because in this day of HD perfection the rough video edges are going to annoy many who don't know or don't remember VHS decay. Many younger film fans who won't watch black and white films will balk at this. On the other hand if you are a fan with a great love of the film or even just some one with a like of the film and you get a chance to see the film this way do so because it adds so much.
Posted by Steve Kopian at November 05, 2013