Here's some reviews of the films in the collection entitled People and Places which plays Saturday at 11:30 at SVA. Its quite simply one of the OH COOL must see events of DOC NYC.  The three films are three of the best films at the festival and three of my favorites as well. 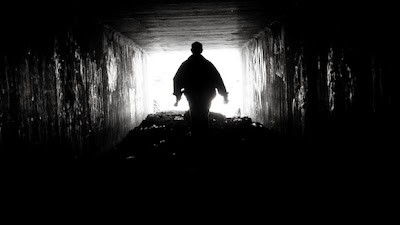 LOST VEGAS
A moving look at the storm tunnels that run under Las Vegas through the lives of two men who live there. Mike is a former cop who went to Vegas to make money but ended up unemployed and lived in the tunnels for a year. Mike acts as a tour guide showing us the ins and out of tunnel life. Ned is an addict and club promoter who is looking to better his life and return to his family in Colorado. Through their stories we learn what it's like to be down and out in Vegas.

Created to channel the occasional flash flood away from the city the 200 miles of storm tunnels run underneath the city. Because the rains only come occasionally they have become home to people who have no where else to go. Normally they are bone dry, but when the rains come they rapidly fill with runoff that makes them full of fast flowing water as deep as ten feet. With no other option people from all walks of life risk the occasional storm just to have a place to live. As Mike says some times the people in them are people who are typical scraggly homeless while others are perfectly dressed.  Lest we forget, anyone can be without a place to stay.

An often achingly beautiful film (I wish I had seen this on the SVA's big screen) this is film that makes you think what you would do in a similar situation. It also raises the troubling question of what we are doing for homeless people since Mike says that while the city has services available, they are more concerned with making sure the homeless don't detract from the beauty of the illusion rather than actually helping anyone. They'll help if you ask but you have to ask.

A super film and worth going to see it when it plays Saturday. 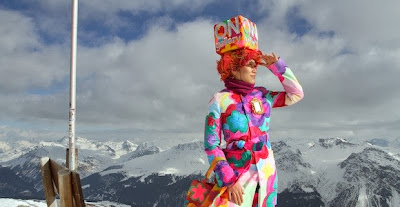 ON BLOOMING ART
Cathryne Czubek who did the thought provoking A Girl and a Gun, returns to DOC NYC with the wonderful short portrait of  artist ON Megumi Akiyoshi. ON lives and works in New York and uses her art to bring life and color to the city.  I have no idea what to say, the film is only 6 minutes so I don't want to ruin it, but if you want my advice you really need to see this it will make you smile.  Actually what we need is for Czubek to make a longer film on ON because her art is just so damn cool. A wickedly wonderful delight. 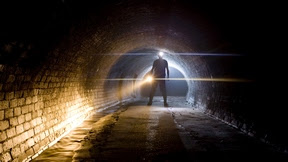 A BEAUTIFUL WASTE
Photographer Steve Duncan takes us down into the sewers of New York and shows us wondrous things.

Not to put too fine a point on it this is one of my favorite films at DOC NYC, and probably of the year. This is one of the most visually arresting films as well. The moment when Duncan's photos fill the screen is a true jaw dropper.  Wow. However, even before that the film has some truly cool stuff in it.

Its five minutes long but just goes from first frame to last and just takes us some place we've never been and shows us something we've never seen. It's made me regret not being able to see it on a truly big screen.

This is a great film in a small package.

Go see this and the other films Saturday.
Posted by Steve Kopian at November 14, 2013