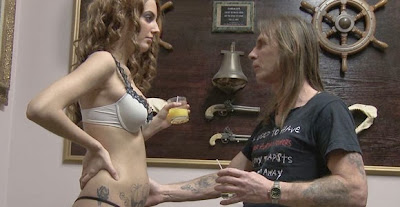 Shawney Cohen paints a moving portrait of a family who just happens to run a strip club and hotel. The family and family business is his parents and he's involved in the business, at first because he thought it was an easy gig until he got his life together, but then he found it too easy and never really left.

I should probably point out right at the start that anyone who is expecting to be thrilled by the prospect of seeing girls in various forms of undress are going to be disappointed. Yea, there are some naked women, but mostly it's the clothed family trying to run the business, deal with employee problems, health issues and everything that comes up in the course of just living and running a business.

To be honest the film completely blindsided me. It was not what I expected. I was not expecting to either like the film as much as I did,  nor was I expecting to like the family as much as I did. Somewhere in the gruffness of the bad, the eating problems of the mom and the showy ways of the brother I found a family I could relate to. This is not a family that is ultimately any different than most others I know except they run a gentleman's club, and even that isn't the focus here.

I honestly don't know what to say beyond that. Its not that I don't have more to say, rather I'd rather you go and meet the Cohens and let them take you in. This really is a film that I don't want to spoil by telling you everything that happens, because the joy in the film is finding that what happens is not what you expect.

Easily one of the best films at this years DOC NYC. Look for it to show up on one of my end of the year lists.

The film plays Friday night at the IFC Center and is a must see.
Posted by Steve Kopian at November 14, 2013