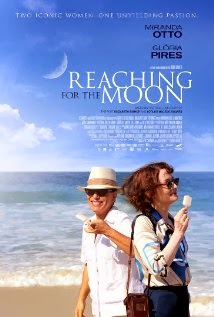 I saw Reaching for the Moon back in April at Tribeca. I went to see it simply because I really like Miranda Otto. The idea was to watch the film to fill some time before I wandered off to see some other film that was higher on my must see list. Truth be told I didn’t expect to stay all the way to the end, the idea was to duck out at a certain point and move on.

Well I didn’t duck out, I stayed to the end and frankly I’m oh so much better for it.

With the film coming out Friday to theaters I wanted to take the time to write a few words in the hope of getting you to get out and see the film. I can’t in good conscious write a full on review of the film (my Tribeca blurb is here) simply because too much time has passed. While I don’t remember enough to write of the film critically, I can speak about it emotionally.

Based on a true story Reaching for the Moon is the story of poet Elizabeth Bishop who leaves New York for Brazil. There she meets and falls in love with architect Lota de Macedo Soares. The films follow their relationship over the course of many years as the pair draw strength for each other.

How is the film? Consider that back in April I saw 80 films at Tribeca and that the vast majority of them will now draw a blank stare from me if you mention the title but I remember Reaching for the Moon. Not only do I remember it I remember whole sequences, I remember Lota's‘s wonderful house, the attempt to build the park, the New York scenes that bookend the film, I remember the emotional sparring between Lota and her lovers both Bishop and another woman. There is something about the film, something about the wonderful performances buy the whole cast and especially Otto  as Bishop and Gloria Pires as Lota that makes the film truly special. 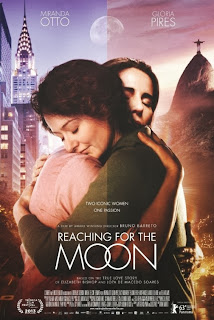 How special is this film? Its one of those films that grows and blossoms in your heart as time goes on. This is a film that, in my case, was not picked as one of the best films of Tribeca- but which has managed to stay in my heart when other, so called better films have faded from my mind.

You need to see this film. More importantly you need to see it and let it grow and blossom inside you. Trust me if you go see this film, odds are, even if you don’t instantly fall in love with it, you’ll find that six months on you’re still talking and thinking about it. Yea, there are films that instantly seem great, but in many cases they fade from view. With a film like Reaching for the Moon the greatness comes not from the infatuation of a first kiss, but from the realization that this seeming little film is instead part of you soul by simply becoming a traveling companion.