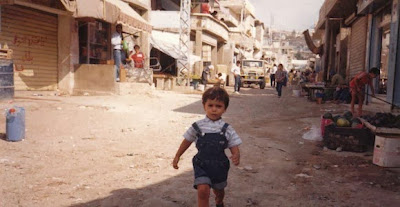 A World Not Ours is a trip.

It begins with director Mahdi Fleifel returning to the refugee camp he once lived in and explaining that only refugees can enter the camp. Since he hasn’t been a refugee for almost 30 years his paperwork confuses the guards every time he visit. It’s a surreal Kaka like moment told in a style that could have been done by Woody Allen in his funny mode. Once we get into the camp Fleifel introduces us to his friends family and life inside the camp. It seems to be good time with good people.

However over the course of the film the film gets tinged with darkness. We see the problems of living in the camp, no one can really earn a living. Everyone dreams of returning home to Palestine, the trouble is the place they want to get to no longer exists except as an idea. Frustration reigns. His friend hates the place, and despite being part of the PLO, he wants god to come and wipe him and all the Palestinians off the face of the earth. He contemplates becoming a suicide bomber simply because its a way out It’s a dark turn that is obviously the venting of much buried rage.

Fleifel‘s film is brilliant. By turns funny, touching and troubling. It’s a film that changes before our eyes going from light family drama into a film of very deep concerns. What is the fate of Palestine and it’s displaced peoples? The camps, while they are now 60 year old homes to thousands, they are not these peoples spiritual homes. Those in the camps are merely existing and dreaming of an idea. While never full on dark, the film raises a lot of questions about this displaced people that left me pondering for hours afterward.

Perhaps the biggest and most troubling questions are reserved for Fleifel himself and those like him. Free of the camps they are still connected by friends and family. What sort of damage are they inflicting on those still there? What sort of cracks are they opening up by going and coming with a freedom those stranded in the camp don’t have? The questions are more troubling in many ways than those of simply what to do with the people in the camps.

I loved the film a great deal. This is a film I want to revisit several more times down the line, especially when I can truly grapple with the questions it raises without having to bump on to the next thing at a film festival.

(ADDENDUM: This film won the Jury Prize in View Finders Section of DOC NYC)
Posted by Steve Kopian at November 20, 2013