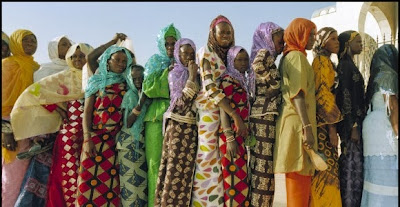 Touba is a city in Senegal. Its the home to a mosque founded by the Bamba the spiritual founder of the area's Muslims. Every year the faithful across Senegal and the surrounding countries make a pilgrimage to the mosque in order to pay tribute to the Bamba and to fulfill the holy obligation of making a pilgrimage. Over the course of seven year director Elizabeth Chai Vasarhelyi and her crew filmed the events that transpire over the course of the festival days and turned it into an immersive experience that is kind of like being dropped into the masses of people.

I have no way to explain what the film is like other than to say its awesome in the truest sense of the word. I was sitting dumb struck, gob smacked and amazed at what I was seeing. Yes its simply people on a pilgrimage, yes I’ve seen stuff like this, but never like this. Never before did I feel I was there. The sound and image are truly overwhelming. I wanted to turn it off but at the same time had I been there in Touba I couldn’t turn it off it would all just have to wash over me.

Words really fail me where this film are concerned. Its one that anyone who loves what documentaries can do really must see- and see as big a possible. In all seriousness this is a film that gains with size. Its also a film with a wicked surround track that puts you in this place. If there ever was a film that should be seen in a theater this is it. You need to be free of distractions and just make the trip and the only way to do that will be to disappear into a darkened theater and make the journey to Touba.

One of my most magical film going experiences of 2013.
Posted by Steve Kopian at November 21, 2013