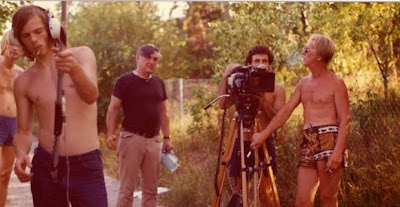 As film director Joe Sarno begins work on another sex film he and his wife look back on their lives and careers.

A good film for fans of Sarno who will be thrilled with all of the clips and the talk of the making of his films. The film is also a really good introduction to Sarno's work since it gives you a nice over view to it and the changing times in which he made his films.

On the other hand if you're not a fan of Sarno's work this film won't change your mind. To be certain it will put it into perspective but it still won't make you like them. Honestly I'm not a fan of Sarno's films. While I admire the darkness in them, and Sarno's films can be very dark, MAybeoverly dark for  "exploitation and sex films, with the result I don't think I've ever really been a fan of any of them. Of course that doesn't mean I don't own some of them, I do have them in my collection but I don't watch them with any regularity.

To be honest for me the non-fan watching the critics and museum curators talk about Sarno's work is kind of bewildering, not because I have a problem with what they are saying about Sarno's attempt at making them sexy art films, rather I just don't find his films any good. Sarno could do what he did because he showed skin, he's kind of like an American version of the Japanese pink industry where directors could do what they wanted so long as people had sex every so many minutes. The problem is that Sarno made potboilers with breasts.

But I digress. My dislike for Sarnos films has nothing to do with how the documentary on the man and his films plays out. As I said above The Sarnos is a very good film that is a great intro to the man and his work and a boon for his fans.
Posted by Steve Kopian at November 14, 2013