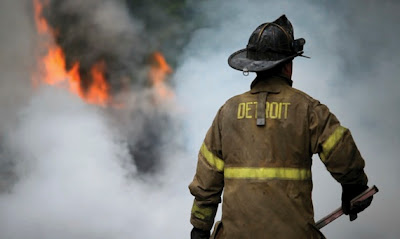 A year with a firehouse in Detroit.

I'm a firehouse brat. My dad is a volunteer fireman and I spent much of my childhood hanging out at the firehouse with my dad. I always wanted to be a fireman, but by the time it came to sign up I was a pain in the ass teenager who thought he knew anything so I never joined. that doesn't mean that I stopped wanting to be one.

Following the men of Engine COmpany 50, the busiest fire house in the country, this is a year in the life of the firemen. We see everything that happens to them and some of their families.

Burn is a you are there, in the fire, on the trucks, racing to the rescue sort of a film. It has footage of fires that will make your jaw hang open. Why? Because you've never been in a fire like this. For get Backdraft or any other fire film, this is the real deal. Its so amazing that for the first time I understood exactly what all the stories  I was told actually meant.

A more complex film then just men fighting fires, the film is a look at how government budget choices affect public safety. A stat is given that as the number of fire calls have gone up the number of fire fire fighters has been chopped in half. The men are are not being replaced. As for the equipment, lets just say it's seen better days. One of the characters in the film is the Fire Commisioner who wanders through the film stuck between a rock and a hard place, not having the money to fix things and getting ears full from his men who need working equipment. We also see the tragic result of having a non-functioning pump.

This is a super film. Its a film that is a nice counter point to Hollywood epics or the craziness of TV's Save Me. You really want to see this film., especially if you can do so on a really big screen.

One of the better films shown at Tribeca.

(I should state that this won the audience for Best Documentary at Tribeca. Its not, it's definitely the most spectacular but not the best over all)