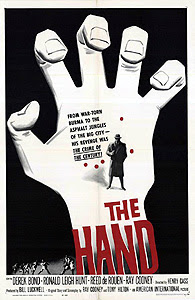 Lurid little thriller tells the story of the police search for the story behind a drunk having his hand cut off. Later as the police investigate the drunk is murdered and the hunt for the killer is on. The story begins in Burma during the Second World War when three commandos are captured by the Japanese and interrogated. The Japanese solution to get the answers is to cut off some hands. The repercussions of what happened so many years ago is what drives this little movie.

This is a neat little film that never fully makes 100% sense. We follow as the police try to unravel what has happened and why but in the end I don't think that everything is perfectly clear. Not that it matters since the movie is so dark and lurid at times you can't help but get drawn into the action. The violence is brutal and the language is course (at least by 1960 standards). Its a movie that doesn't behave like your typical by the numbers crime drama and is better for it.

I liked this movie a great deal. Its far from perfect, but it does hold your attention.

Definitely worth seeing if you run across it.
Posted by Steve Kopian at October 27, 2012