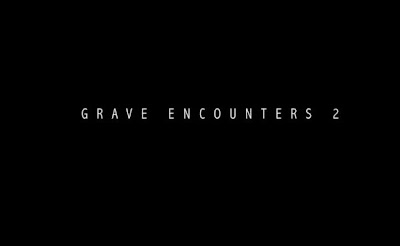 Back on the 2nd I posted an interview with the Vicious Brothers and a mini-review of their new film Grave Encounters 2. The point of the review was to warn people not to go into the new film expecting an exact duplicate of the first film. I said that because when I saw the film for the first time (I’ve seen it several times now) I was extremely disappointed by the film. I was so disappointed that I stayed up until almost three in the morning writing a review that trashed it from stem to stern. Much too exhausted to finish the review I turned off the computer and collapsed in to my bed…

The next day, after coming in from some New York Film Festival screenings I took a look at what I had written and realized I was much too harsh on the film. The gulf between what I wanted from the film and what the film was (and tiredness) had cause me to be over disappointed. Calmer heads prevailed and I decided that I would talk to the Vicious Brothers and then re-watch the film and formulate a review.

While the second viewing helped me to write the mini review it also made it clear that I needed to see the film, not on my laptop, but on a big screen under circumstances that matched a film going experience. Taking a break from too many NYFF movies I sat in the dark in my living room and watched Grave Encounters 2 yet again.

It has several really big problems, but it also has some really good things in it. I suspect that the problems are the result of having too many cooks ( director John Polquin was joined on set for the whole shoot by the Vicious Brothers who helped with shooting) and because from what I can piece together from my notes the film came together probably faster than it should have (The financing came in somewhat unexpectedly and the Brothers had to hand off the direction because they were in the middle of another project).

For those unfamiliar with the plot, it has Alex, a film school student poorly reviewing the first film on line. He then gets a mysterious email telling him that the first film is actually real. This sends him down the rabbit hole and ultimately to Canada and the closed hospital that was the location of the first film. It’s a trip into hell.

As I see it the film has three major problems.

First off the cast is terrible. Where the first film made us believe that the actors were their characters we never believe these people for a minute, no one other than some of the minor characters are believable. Dylan Playfair as Alex’s friend Trevor is the worst offender since he always seems to have a wink in his eye and a snide smile on his face. He wrecks the film almost single handedly.  He's on a lark even in the worst situations. Most of the rest of the cast seem to be riffing on his lack of seriousness and it undermines everything. (Sadly most of them are only marginally better than the poor acting we see in the film in a film)

Secondly the college partying and partying attitude that fills much of the first 35 minutes never builds the right mood for the film. The seriousness of the mystery and horror is completely upended by the drunken behavior. The fact that the kids really don’t believe what’s happening until they are in the thick of it diminishes the film. The film is almost a college comedy which is not what you want in a horror movie.

Watching the film the second time I was clicking threw the film back and forth on a screener provided by the PR people. I had been using notes from the first go through to see points  I marked out where scary or plot important things happened and I jumped to them. When I jumped from say the opening montage to the trip to the mother of one of the actors, to some of the LA sequence to the time in the asylum I found that the film actually played better. If you skip the college kids being stupid stuff the film suddenly snapped frighteningly alive. However when I went back and re-watched the sequences with the Halloween party and juvenile behavior the film collapsed. You didn’t care about the characters.

I hate to say this but director Polquin isn’t very good. How he stages many of the sequences kills suspense. Watch how the filmmakers advance on the asylum at night it’s completely unremarkable. Actually it looks like a bad TV movie, or as if it's filler. This carries over to the guard appearing in the asylum to confront them. The staging is all wrong and it plays like high comedy at a moment that the film should be ratcheting up. There are other sequences that are staged just as badly, if not worse…

Now why am I laying this at the feet of Polquin and not the Vicious Brothers, because quite by accident I stumbled on something, I found out that the script actually works on it's own terms. What happened was during the second go through on my lap top I stepped away from the computer to get something off a shelf. Listening to the film and not watching the sequence I suddenly found that the sequence played so much better.   What had Polquin done? Somehow he had taken a well written script and arranged the actors so that any and all life and seriousness was stripped out of it. I then went back and replayed several sequences in the first half of the film and found that things played better sans the visuals. The script works the staging of the sequences doesn't.

This isn’t to strip the Vicious Brothers of all blame for the films problems, they wrote the script and they are to blame for several weird loops in and frequent breaks of logic that plague the film. For example I still don’t completely get the producer that Alex visits and who tells him everything. And as much as I like much that happens in the asylum, the free reign insanity literally anything can happen nature from the get go makes no sense. The sequence goes from zero to balls to the wall way too fast. The dream like logic of the first film slowly crept in here it’s in full bloom from the first and the film never builds the level of suspense it should have as a result.

(I'm not completely sure who to blame for how it's shot. The film is nominally a found footage film with some crashes into standard story telling, but not only does much of the found footage look too good, it occasionally seems to have been filmed by none of the characters in the film, nor the filmmakers themselves, rather its by someone else-shades of Chernobyl Diaries)

Say what you will the film has its moments and scary sequences. The early sequence visiting the actors aged mother is creepy. The shocks of sequences from the asylum are jarring (exploding doors, weird faces, the tall man, out the window). The monsters are incredible. I love the sense that anything can happen. I would love to say more but I don’t want spoil the things that do work.

As I said It’s okay. Really it’s a rental…it’s a rental with friends, partly to decrease the cost and partly because it may be fun to riff on the opening 35 minutes. 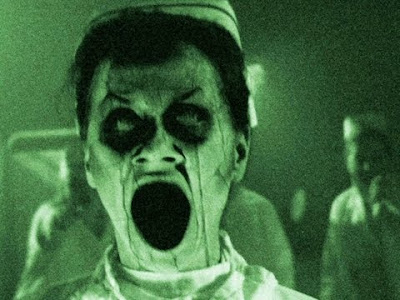