This is my annual catch up post. I’ve done one or more of these posts since I started Unseen and it’s bunch of capsule reviews for films from the previous year that I saw but never got around to reviewing. Some of the pieces are of films I saw a while ago and some are the result of my annual year end catch up where I wade into theaters  and DVDs and see what I should have. CONCUSSION
Will Smith gives an Oscar worthy performance as Dr. Bennet Omalu who was out on the trail of the effects of head trauma in football when does the autopsy of Mike Webster (David Morse also Oscar worthy) a favorite player from the Pittsburgh Steelers. A damning indictment of football because of the injuries it inflicts.It's right that the NFL is frightened of what the movie will do to their livelihood. And while the film may not make a fortune, but it will get the attention of people if not now when it hits VOD and home video. See it and you will never let your kids play football again. As drama the film is a bit too preachy, but at the same time its message is vital and the performances are amazing. EVEREST
Recounting of the 1996 tragedy of death and heroism on Mount Everest.  A visually spectacular recounting of the tale that took so many lives in one go (and which strangely was one of the safest years over all on the mountain) the film suffers the problem that the earlier INTO THIN AIR did which is the story is simply too big to tell in a narrative film in two hours or less and have it feel satisfying. There are simply too many characters, and too much attempting to shoehorn back story in that the film feels rushed and soap operaish. Yes its entertaining but nowhere near as good as any documentary or book on the events even if it looks amazing. THE DANISH GIRL
Eddie Redmayne follows up his Owscar winning performance in THE THEORY OF EVERYTHING with a portrait of Einar Wegener, a Danish landscape artist who became one of the first people ever to undergo surgery to change his sex. A great looking movie that feels like it it trying way too hard to be about something. I lost interest about half an hour in as the look and tactile feel of the film overwhelmed the under whelming script. Far from bad the film felt almost like a random PBS/BBC drama. MONKEY KINGDOM
Documentary about monkeys in an abandoned city in Sri Lanka is the latest in Disney's true life adventures has some stunning images undercut by just okay narration and a need to be family friendly. It looks great but I didn't need the narration.
Where is the BBC when you need them? PAPER TOWNS
Quentin Love Margo. When Margo goes missing Quentin enlists his friends to go find her. Okay film probably plays better if you're a teen and can relate to the angsty love and desire to find a future film is about. I also think it would have been better if I didn't want to slug Margo or find Quentin's friend Twee MAZE RUNNER
Yet another dystopian YA fantasy series comes to the big screen as a bunch of kids find themselves near a glade near the entrance to a gigantic maze. Whats on the other side of the maze?  Good film on its own terms doesn't seem that great since it plays like so many other YA novel based films of late. Score points for fantastic visuals, take some away for standard dystopian teen interaction. I do like the film I just wish it wasn't like so many other films. AIR
Okay science  Fiction throw back has the feel of a 1980's science fiction that is more talk than action. The film concerns a pair of technicians woken up in an underground facility in order to do maintenence on the machinery that keep air clean for the cryosleeping population. It seems that a chemical accident has wiped out most of the population of earth and made the air unbreathable. As they are finishing up their shift somethings go wrong and their lives are put in danger. Good enjoyable film is a bit too low key to be exciting but at the same time it manages to hold your attention.  Worth a shot for those who want an off the beaten path science fiction tale. VACATION
As low as you can go sequel has a grown up Rusty going on a family vacation with his wife and kids. In it's way it is as bad as you've heard but it still has laughs coming from every sort of inappropriate subject you can think of. Its awful but it has laughs. Wait for cable when there will be no record of you ever watching it. SCOUTS GUIDE TO THE ZOMBIE APOCALYPSE
Remarkably good zombie comedy has a trio of scouts fending off a zombie outbreak. Despite a few stupid jokes and continuity that is wonky (Strippers head almost falls off but is attached in the next shot, stand up of Dolly Parton always faces the camera) this is a very funny film with a few jump scares. Definitely worth you time. 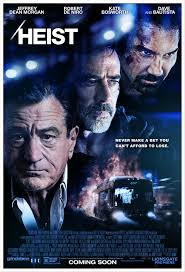 HEIST
Jeffrey Dean Morgan and friends rob a casino operated by tough guy Robert DeNiro. When it all goes south they are forced to hijack a bus... Decent B level crime film is a real head scratcher thanks to the A level cast. Why are they in this film?   No matter this is a solid little thriller that won't rock your world but will entertain the hell out of you on a rainy Saturday night when nothing is on. LEGEND
Tom Hardy plays both Reggie and Ronnie Kray, the notorious gangsters who held sway over London in the mid 1960's. The film documents their rise and fall from power. In many ways better than Peter Medak's 1990 film bio, this film has problems of it's own, chief among them being a reason for us to care about these bad men. Yes they are interesting to see go through their paces, but at the same time we never really like them and there is no reason to root for them. Like the earlier film the Krays come off as bad guys from another time and place and don't resonate much as being reflective of today. That said the violence and the sheer insanity of their behavior does make this compelling at times, much like watching a traffic accident is compelling.
Posted by Steve Kopian at January 03, 2016

Email ThisBlogThis!Share to TwitterShare to FacebookShare to Pinterest
Labels: capsules