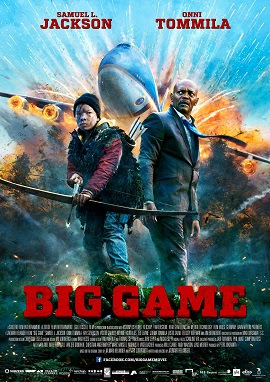 If you watch the trailer for BIG GAME you're going to get the impression that it's an action packed, balls to the wall film because the trailer cuts together a good chunk of the action sequences in it's two or three minute running time. The trouble is that's not the film.

The film is nominally two stories that collide. The first is the story of Samuel L Jackson's President. He's not well liked by some people who seem him as a soft. One of the members of his staff sells him out and sets him up to be kidnapped. When the plane goes down he is found by 13 year old Onni Tommila. Onni is in the woods to find and kill an animal on his birthday. Its a test of manhood for those in his family and by all accounts he's loved but not highly thought of. Onni at first thinks Jackson is an alien, but then realizes his mistake. He takes the Jackson along as he goes hunting...and that's when the bad guys show up and Onni has to become a man and keep Jackson safe.

I suspect that anyone who saw the trailer and then the film was greatly disappointed because there isn't a a lot of action. There is tension, but outside of the plane crash sequence there really isn't any conventional action sequences until the final 20 minutes. The film as it is is actually a coming of age story.  Yes we have the whole political intrigue angle, but in actuality the film is about a boy becoming a man and bringing home the biggest game possible, the head of the free world.

I liked the film a great deal. I had read some of the reviews when it came out which kind of inferred that the film didn't work for whatever reason. Going in slightly aware that the film wasn't as advertised I let the film be what it was and was greatly rewarded. While I was disappointed  that there wasn't more action than what we saw in the trailer, I liked that the film was ballsy enough to be its own thing. I liked the the interplay between the leads. It made sense that they would end up as friends. (I also like the cynicism that marks the end of the film)

Why has this film fallen between the cracks? I really don't know. This is a solid little adventure film that is a must see for anyone tired of the same old same old crap from Hollywood.
Posted by Steve Kopian at January 26, 2016