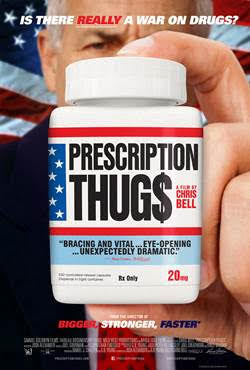 Chris Bell's PRESCRIPTION THUGS was one of the best films at Tribeca and one of the most important films I saw in 2015. Its a damning portrait of how the drug companies are killing us with their medicines, most of which we really don't need or which we need because we have to clear up the side effects of one drug are causing all sorts of havoc.

The film is opening Friday in theaters and on VOD and is an absolute must see. Here is the review I ran back at Tribeca.

Chris Bell's follow up to BIGGER STRONGER FASTER would seem at the start to be been there and done that look at the over use and abuse of prescription meds, but somewhere relatively early on the film takes a personal turn as Bell reveals that the film was made partly in response to the death of his brother from drugs. The film then flips again as more details are revealed.

Damning indictment of the drug industry is a deeply moving look at not only the big companies but also the addicts themselves. This is a film that does what the best documentaries do take a big subject and make it so personal that people are very likely to actually get up off their asses and do something.

I can't say enough good about this film. It really blew me away. I mean that. Consider that by the time I had seen the film I had seen 40 other festival films in two weeks, and four more earlier in the day. I was ready to walk out and go home, but I figured I'd stay and give it a try. At first I was considering how long I was going to stay only to get the thought out of my mind as Chris' brother dies and Chris looks for answers. By the end I was deeply moved, so much so I put it on our Must See List of the festival.

See this film. Even if you think you know what the deal is with the companies odds are you'll learn something new, additionally Chris' own story will move you.

One of the best films at Tribeca