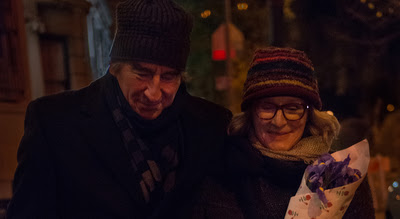 ANESTHESIA premiered back at Tribeca last year and has at last finished the festival circuit and is getting a  regular theatrical review this Friday.  Our correspondent Ariela saw the film back at Tribeca and filed a report not long after the festival. Here is a repost of that report.

Anesthesia
Anesthesia had its world premiere at the Tribeca Film Festival. I'm happy I was able to attend one of the screenings. Anesthesia takes place in New York City and tells the store of a professor who gets violently mugged. The movie starts with the mugging and then goes back and we learn who this professor is and the relationships that surround him and what leads to the mugging. I don't want to give too much away, especially because I really enjoyed it! It was really gripping.The cast was great, it includes Sam Waterston as the professor, Glenn Close as his wife, Kristen Stewart, Gretchen Mol, Tim Blake Nelson (who also wrote and directed it) among others.I really hope this gets picked up, because it was by far one of the best movies I saw at the festival. (out of the 14 I saw)
Posted by Steve Kopian at January 04, 2016