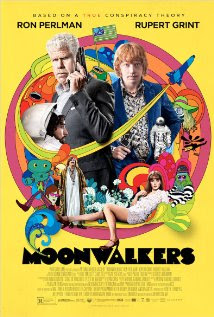 The animated opening credits are great but outside of that and rock solid performance from Rupert Grint MOONWALKERS is a bloody mess- literally.

The plot of the film has the American military worried that they won't be able to put a man on the moon so they send an over the top CIA agent (Ron Pearlman) to try and find Stanley Kubrick. Unable to do so he hooks up with the manger of a bad rock band (Rupert Grint) in the hope of staging a fake landing. However things go horribly wrong and before you know it turns into a bloodbath thanks to the interference of a variety of people.

I suppose this will be funny if you click with its stupid funny vibe, but to me this was just stupid characters doing stupid things. Somewhere about the time the lead singer in Grint's rock band started touching himself I started to drift off because it was clear everyone from top to bottom in the film is completely clueless.  It only got worse as things went along to the point the need to suspend disbelief took a turn to the point where you'd have to hit yourself in the head with a brick to accept any of this. By the time the huge shoot out occurred at the same time the fake moon landing was happening I was just shaking my head and mumbling that life was too short for this sort of crap.

This would have worked if the increased the IQ of the script by a half dozen or so points and had played it straight.As is this is a real mess and the first film of 2016 that I can say truly sucks.
Posted by Steve Kopian at January 20, 2016

Email ThisBlogThis!Share to TwitterShare to FacebookShare to Pinterest
Labels: comedy, England, not worth the effort