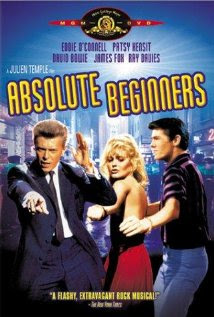 If you were young, talented and had attended a school that let you go home most nights, Britain was a grim place in 1985. I'm sure most Unseenerati already know this through the films of Ken Loach, the televisual works of Alan Bleadsdale and just the unremitting grimness of every cultural artifact from the period that didn't involve Anthony Andrews and Nigel Havers wearing stripey blazers, carrying teddy bears and running along beaches to Vangelis soundtracks in training for some long ago Olympics whilst suppressing feelings that dared not speak their names.

It were grim up North and it was somewhere in the 1920s down South.

Into this mix, like a florescent purple sock under a Seville Row suit came Julien Temple's ambitious, ill-fated and much ill-féted "Absolute Beginners".

The idea was very good. Colin MacInnes' 1959 novel about London's youth culture of the time was a cult classic and its paralels with 1980s London resonated very strongly, replete as it was with a stultifyingly conservative establishment, simmering racial tensions and a voracious advertising industry just looking for ways to commercialize youth culture. All that was required was to ignite Paul Weller and retire. Now the fact that you are reading about this film on a forum called Unseen Films should suggest to you, if you weren't already aware, that things didn't go according to plan. You may have heard of this film as the Howard the Duck of the 1980s British film industry. You may have heard of it as many things. What you are very unlikely to have done is actually seen it because after its failure at the box office, it was suppressed in a manner worthy of Kim Jong Un's last year's family Christmas video. It was released on VHS one Tuesday in March 1989 and then withdrawn the next day and to the best of my knowledge, has almost never been released on any other format.

And I don't understand why.

Because, while far from being the searing indictment through the medium of pop music of the Thatcher government that it was perhaps intended to be, it's actually quite an enjoyable film which takes on the added charm for people of a certain generation (ie: mine) of revisiting that short halcyon period of the late eighties when British sophistipop as exemplified by the Style Council and Sade ruled the airwaves.

The plot, such as there is, is a curious superimposition of the Faust story over MacInnes' simple stream of consciousness "a boy with a talent" wanders through his London in the days before the 1958 Notting Hill race riots. It is told through a mix of gorgeous period street scene set-pieces and luridly neon-lit, amphetamine-inspired hallucinatory musical numbers, so pretty much the same as a 1940s MGM Gene Kelly pic really. No. Seriously, many of the musical numbers are utterly forgettable, as are most of the lead performances, but the two show-stopping songs, "Anything For a Quiet Life" a cameo piece by former Kinks front-man Ray Davies and the gloriously surreal "Selling Out" featuring David Bowie as half-Fred Astaire, half Mephistopheles only manage to fall on the safe side of the fine line between pastiche and plagiarism due to Temple's sheer inventive oddness.

As suggested above, most of the lead performances are utterly forgettable, but Bowie really does shine as the ostensible villain, advertising executive Vendice Partners, (and no, you can blame the original author for that rather heavy-handed bit of concrete metonymy rather than the well-meaning eighties lefties,) who really does manage to be the most likable character in the film despite the fact you know you should despise him.

If you have read Colin MacInnes novel and are looking for a cinematic adaptation laying bare the skull beneath the skin of late 1950s England, jog on. If you are looking for a searing indictment of Thatcherite Britain and its ugly undercurrents of racism and hypocrisy, you probably want something made by a Ken or an Alan.

But if you want a snapshot of joyous silliness in the face of disaster, a strange meta-nostalgia party piece, you really should track this film down and give it a chance.

Because if you don't, then Thatcher will have won.