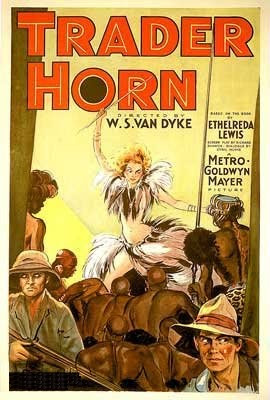 Starting tomorrow we're going to run through all of the films that were part of the series of Tarzan films that started in 1932 with TARZAN THE APE MAN. However before we start with looking at the MGM Tarzan films and all that it spawned, I'm going to talk about TRADER HORN which begat the Tarzan films.

If you're wondering how a fictionalized film about a real life hunter in Africa spawned a film about a fictional ape man, consider that when MGM decided to send film crews to Africa they decided to shoot additional material that they could use in other films. They shot so much film that MGM felt they had to do something to use the footage. They thrashed about looking for possible projects when the idea of doing their own version of Edgar Rice Burroughs character came to mind.  Negotiating a deal with Burroughs MGM went into production and the rest is history.

TRADER HORN as a big deal when it was made. It was huge Hollywood project that went on location, and then had to be re-shot because of the coming of sound and because of poor sound quality. One crew member was eaten by crocodiles, another was killed by a rhino (a deathwhich ended up in the film). There were floods and locusts and illness. And when it was done it made over a million dollars in profits- which for the time was huge.

It's part travelogue, part adventure film and part romance. It has something for everyone.

The film is  nominally based on the biography of a real person, but the plot is something else entirely. The film has Horn and a young friend on a hunting expedition. When they run across a widowed missionary traveling at night, Horn promises her to continue her quest if something should happen to her with in  the next week. Not long after Horn and his friend find the woman dead near the bottom of a legendary waterfall.  The two men then head off on the appointed quest, which is to try and locate the woman's daughter who had been carried off as an infant. Raised among a remote tribe she is treated as a goddess... complications of course arise.

Grand adventure film is creaky in some ways, and yet in many others it's  truly spectacular and high adventure. This is the sort of film they mean when some says they don't make 'em like that any more. No they don't.

Full of wild animals, great scenic wonders and barbaric violence (way too many animals were killed for the film) This is, in some ways, what life was like 150 years ago. This is a film that really doesn't feel like most other epics and we are better for it.

The film is spectacular. It’s a grand adventure that feels strangely real. Credit the fact that the film was shot on location and seems to have been done in such a way that it doesn’t feel like its Hollywood on the veldt or in the jungle. The images feel very much like the work of the Johnsons, Martin and Osa) and other documentarians of the period who turned out a steady stream of films showing what life was like in Africa and elsewhere. I think the film is truly more exciting because of it, more so than the films that used the footage shot during the production.

How good is the film? It was a film that ended up in the running for the Best Picture Oscar. To be certain the film has aged unevenly, partly the result of Hollywood conventions of the time, but also the result of technical issues of being a film that was shot silent and then reshot as a sound film. The blending of things isn’t always perfect and some of the sound effects can be uneven, but largely it remains serviceable.

In this age of political correctness I find the portrayal of the native people interesting. Yes there is a condescending nature to some of it (Duncan Reynaldo calls them ignorant children) and the portrayal as savages is at times over done, but at the same time the film has these moments where we actually get glimpses of actual tribal life and dress. When you compare it to some of the nonsense that the Tarzan films gave us with ooga booga pigeon English and war paint TRADER HORN actual has moments of nobility.

I really like this film a great deal and I’m a bit confused as to why the film never really seemed to play much on TV when I was growing up or even on Turner Classics. This is a good grand adventure.

Definitely worth a look.
Posted by Steve Kopian at January 31, 2016