SEAHORSES opens Friday so here's a review and my interview with the director.

Jason Kartalian's SEAHORSES is getting a theatrical release starting Friday in Los Angeles. It is also going to be available at iTunes, Google Play and via Amazon's streaming service. Its a super film that I have been trying to get people to see since it first appeared. Now there is going to be no excuse.

In the hope of getting you to get out and see it I'm going to republish my original review and I'm going follow that with the interview I did with Jason.

I don't know what else to say. This is a super little film.  It has some great performances and is the sort of thing that ends up haunting you. I say this because I've been pushing this film since I saw it.

Trust me I think you're really going to like this film a great deal.

Seahorses world premiered a couple weeks back at Dances with Films. It’s a film that needs to get out and find its audience so it can dance around and through their lives.

The film is the story of Lauren and Martin who met through Craig’s List. They have returned to Martin’s apartment after a night out. As the film opens she is hesitant to really go in; he assures her just wants to the company. She warns him that she probably shouldn’t come in, that there are times one shouldn't let strangers in. We get the sense of a great darkness hiding behind her eyes. She eventually does come in, making her way to the bathroom. Revelations begin immediately for the audience, and less quickly for the couple as we see that they are both deeply damaged souls looking for something. Both, it seems, have more emotional baggage than is allowable by law. The question is: will the pair be able to navigate the evening and find — perhaps if not "the one" — but someone they can hold on to?.

Seahorses is a grand dance between Lauren and Martin. Will they crash together or will their respective bits of baggage — his neediness or her need to constantly protect herself — ruin a potential real relationship? It’s never really clear, especially since the tone is never really full-on romantic. If you walk into the film blind, as I did, you really can’t be certain where this is going or how it will ultimately play out. Cliché it is not (you don't know how good it is to say that).

From my point of view, this is a really good solid film that says so much about today's existence and relationships. If you need proof, all you need do is watch the first half hour which plays out as a kind of twisted version of what seems to be most dates today, two people together but not together. You know what I'm talking about — two people on cellphones, not interacting with each other, but rather with other people somewhere else in the universe. He's in his living room or kitchen trying to coax her out; she is in his bathroom, refusing to leave. They don't talk face to face but via their phones. It’s a clever twist — especially since so much cellphone action these days seems to involve people not talking to a person but staring at a screen and tapping.

The script by director Jason Kartalian is good enough that with a few adjustments this could play very nicely on a stage as a kind of updated version of Terrence McNally's Frankie and Johnny in the Claire De Lune. The film scores points in giving us two people who are closer to real than to Hollywood’s idea of romantic couples — even McNally's idea — since these are very broken people.

While I have a few small reservations with bits of Kartalian's script, his directorial choices are largely first-rate, with a color scheme that matches Martin's aquarium and the staging of several visceral exchanges between the two would be lovers done with a surgical skill that exposes just how raw and broken they really are. Frequently it's Kartalian's staging of the action that speaks louder than his words and allows his actors to reveal hidden layers with looks, postures or gestures. This isn't a film that relies on just one thing, this is a film where it works to create a greater whole.

That the film works as well as it does is thanks to Ian Hutton as Martin and Justine Wachsberger as Lauren. They keep the film wonderfully alive from start to finish. Both of the performances are the sort that show how good actors can be, that get you big roles in big films (said with no disrespect to small films like this). If Wachsberger ends up with a faster rise to the top, it's only because she has the showier role with more to do. However, one shouldn't forget Hutton, who is equally good. He has to play it as a a kind of straight-man, which means he has to be just as good as his partner so as to allow her something to play against. He can't show off lest her performance, and the whole film, crumble. It’s a difficult acting trick, but he pulls it off as flawlessly as Wachsberger.

This is a smart little film you need to keep an eye out for. The film is currently on the festival circuit and it will be getting a later theatrical run. See this film. It’s a neat little story that shows us how much like seahorses we are, trying desperately to steer our lives but really at the mercy of the tide, which may or may not push us toward something or someone we can hold on to. 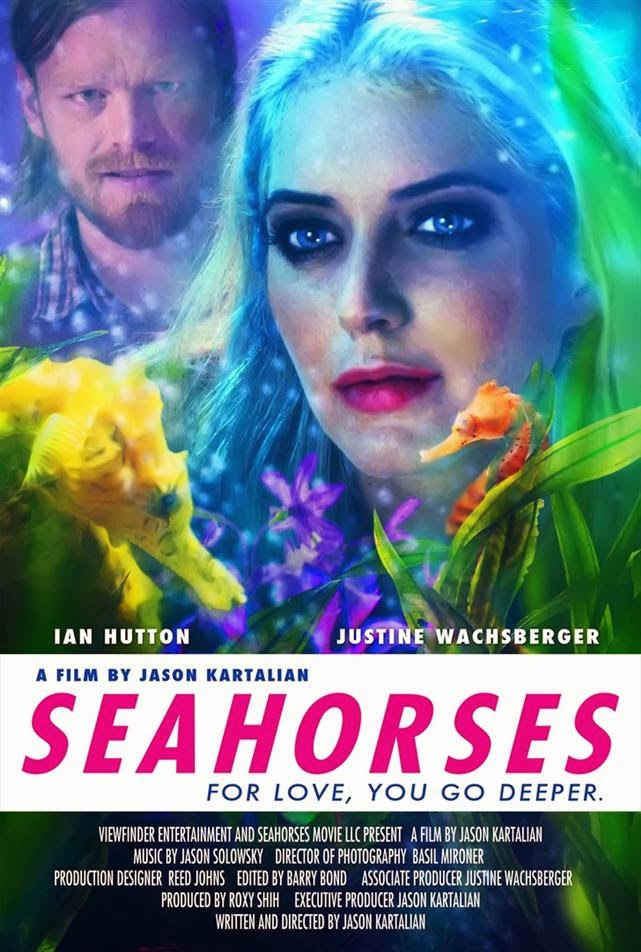 And here is my interview with Jason:

UNSEEN FILMS (U) We had been emailing back and forth concerning the film, and you said in one, that Seahorses came from a place of truth and a therapy for somethings in your life. Would you care to explain where the film came from?
JASON KARTALIAN (J) I was in both professional and personal crises that lead me to writeSeahorses. Professionally, I was tangled up with this sci-fi television series project that started out as a thing of beauty and became frustrating and ridiculous once the money people got involved. Personally, my mother’s health was failing and it was time for the family to make some very difficult life and death decisions that I’m sure we were not equip to make at the time. I started to lose control of everything I valued. I started thinking about life. I started thinking about loss. Was I wasting my time chasing the Hollywood dragon? As for filmmaking, maybe I just needed to create something real. I needed to confront my problems instead of running away. I started to make art for myself. I started writing Seahorses. Then something amazing happened, people started getting involved. They helped enhance and elevate my vision. One person’s story became a mission shared by many talented people. That’s how movies are really made.
(U) I know you've done two other films, How do you go about putting one of your films together? Do you have a family of craftsmen and women that you work with?
(J) With Seahorses, I was very lucky to begin the process with Producer Roxy Shih. She is young, smart, a great people person and possesses an incredible energy. At the time she had been working on all sorts of shorts, rock videos and low budget features that helped us hand select from that talent pool and assemble a “dream team” crew for Seahorses. The team that worked on Seahorses has inspired me as filmmaker and the possibilities one can reach even with a limited budget. I have really tapped into a young vibrant group of filmmakers who are positive, talented and are in it for the right reasons. I look forward to working with the same team in the near future.
(U) A large portion of the success of the film that I'd like to talk about talk about casting. Where did you find Ian Hutton and Justine Wachsberger? Had you known them before?
(J) I spent over 6 months casting Seahorses, I read hundreds of actors (drove my producer Roxy crazy) and then I finally found Ian and Justine. Justine was brought to me as a recommendation from an actor friend. Ian actually originally came in to read for the bad guy role, Travis. I knew he had something special and asked him to try out for the lead. I told Justine she would have the part if she dyed her hair blue. I told Ian I would give him the part if he lost 40 pounds (he was a little chunky at the time) Justine dyed her hair blue and Ian went on a fluid diet! Both Ian and Justine are amazing actors and have great chemistry together. The script was adjusted for them after they were cast. During the rehearsal process, Ian, Justine and myself, worked together creating the beats and the nuances to enhance every moment.
(U) How much did you change once the actors had been cast?
(J) We added a couple of scenes that were work-shopped during rehearsal. We also worked on enhancing moments within the scenes. Ian Hutton is from Oklahoma so we adjusted some lines to fit someone who was a transplant to LA. I learned that Justine multicultural being raised in both Los Angeles and Paris, and I wanted something different for the scenes she had with her brother, so we translated those scenes to French. I feel the French language scenes give her character Lauren even more texture and mystery.
(U) How much of the characters are really you?