One of the joys of doing Unseen is that I get directed toward some truly wonderful things. While I’ve always been curious about numerous films at the festival, I’ve been catching a film for two every year for years, writing for the website has given me a reason to really wade into the festival with abandon. Over the last year it gave me opportunity to see some truly great films such as two of last year’s best films DELI MAN and KING OF NERAC. There is always something cool screening, and even if I don’t like a film I never feel like I‘ve waste my time.

As this posts I’ve seen fifteen of the films screening and I have several more to go, including what I’ve been told are the two best films of the fest CARVALHO'S JOURNEY and CINEMA A PUBLIC AFFAIR . I would add as must sees I DON’T BELONG ANYWHERE the absolute best film I’ve ever seen on Chantal Akerman; THE WEDDING DOLL which has some killer performances, THE RIFLEMAN’S VIOLIN which is screening with a recreation of the events depicted; and LAMB, the story of a boy and his lamb in Ethiopia which is absolutely beautiful. There are of course many more films but I don’t want to be the one to make the choices for you.

Reviews will be running every day for the next two weeks.

And if you’re wondering if you have to be Jewish to enjoy the films, no you don’t. While some films deal with being Jewish or Jewish life many don’t or are only tangentially related. All you need to know is that the festival programs great films- some of the best you’ll see all year- and if you want to start 2016 on a really high note you have to go see something.

For more information and tickets go to the festival web page here.
--- 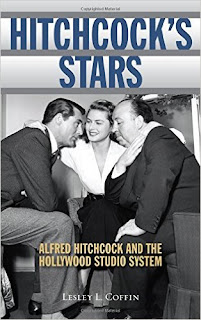 I just wanted to put Hitchcock’s Stars on to the radar of any of you who love off beat ways of looking at films. The book is by Lesley Coffin, a good friend of Unseen Films, and it’sunique way of looking at how films are made.

The book is a look at how Hitchcock went about casting the major roles in his Hollywood films, from REBECCA to FAMILY PLOT. It explains how he was forced to take some actors, got his wish with some actors and had to deal with the choices made. It’s a book that is very specific to just the casting with very little information regarding the films outside of the casting. It’s a premise that is going to drive some people crazy because they are going to want more details about the films which just isn't there. However anything outside of the casting isn’t what the book is about. And it isn't a surprise, Lesley is very specific at the start, explaining exactly and precisely what she is doing. While the limited scope is going to limit readership,as I said the narrow focus is not for all tastes, for those who are interested in the subject and can click into the groove Lesley is traveling it’s an eye opening path explaining how films get cast and how that effects the finished product.

If you're like me you'll want more on the subject, not only on Hitchcock's other films but other films in general because what Lesley is doing is forcing you to really consider how films get made and why they turn out as they do. You have to re-evaluate what you're seeing.

Recommended for those interested in how casting is done and its effect on what we see on the screen.

The film can be had at Amazon
---
This February it’s going to be the battle of the Children’s Film Festivals in New York as Brooklyn Academy of Music’s Kids Film Fest  moves from the start of the month to the end and goes head to head with The New York International Children’s Film Festival. It’s a weird move that has me looking cross eyed at things. I’m guessing last year’s bitter cold and snow made BAM try to shift things to a friendly time of year- but the opening weekend of NYICFF is the wrong time since it tends to be a heavily programmed weekend. My choice is NYICFF hands down even without knowing what is programed.
---
There is a short animated documentary called THE LAST DAY OF FREEDOM making the rounds. I was given a link to the film which concerns a man dealing with the fall out of his brother who is a murderer and given the death penalty. Its a stunning story that is deeply moving- and listening to the tale broke my heart. However I dislike the animation so much that I can not in good conscious do a full review because what I would say about the error would take away from the basic tale which is a kicker. Honestly it would have simply been better just to have the camera run and play it that way and not rotoscope over it. Its a lily that didn't need gilding.
---
And now Randi's links