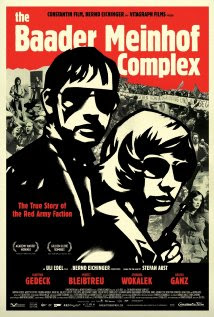 Mostly straight forward look at the terrorist group known officially known as the Red Army Faction but is best known as the Baader Meinhoff Gang thanks to press coverage. Actually the film follows the story of the group from its founding in the wake of several events in 1967 until the death in prison of the initial group of members during about the period that was known as The German Autumn in 1977(the organization lasted a further 21 years).

A very good very gripping film the film sheds a great deal of light on the group and their activities For me the group was something frequently mentioned in the news but nothing I actually knew anything about until I saw this film. One thing I read on line about the film said that in Germany the film had the effect of deflating the public perception of the group as anti-heroes and revealed them to be misguided slackers (if you think about it, they were slackers since they talked a great deal but didn't do as much as other groups. the leaders spending a great deal of time in prison).

While I don't find it to be a great film it is one I like a great deal. I have to say that I found after I read about the group after seeing the film that I liked it more. The film definitely plays better the more you know about the group and what was going on in Germany at the time they were operating. What I found interesting is that when coupled with the recent miniseries Carlos is that I really got the sense that the life of a terrorist is really kind of pointless. its sitting around talking extreme politics with no practical application followed by stints of getting pissed off because the police are hunting you down for blowing things up. What a bunch of misguided morons.

Definitely worth a look
Posted by Steve Kopian at January 29, 2016