Pondering if the Big Chill (1983) matters any more 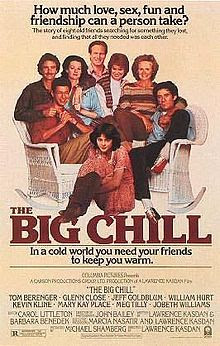 Does the BIG CHILL matter anymore?

I ask the question not to be flippant, but outside of the film being mentioned as sign post in film history where the director and actors all seemed to peak, the film doesn’t seem to be discussed or even mentioned by anyone younger than a certain age. To be certain the fact that Criterion put out a DVD brought it back into focus, but outside of that does the film matter?

When the film was released back in 1983 I remember everyone going crazy for the film. The film managed to perfectly capture the midlife crisis of a generation. Here were a bunch of good looking actors who seemed to look like everyone in that generation felt they looked. They were going through the door to being middle age at exactly the moment as the rest of the 1960’s generation. Here were a bunch of 1960’s college people looking back 15 years on and wondering is that all there is. For the public of the same age it was their lives up on the big screen and they went to it in droves. Now I never hear anyone mention it- ever. Where other big films occasionally pop up in the mix, THE BIG CHILL is almost never mentioned. Actually it is, as the film that Kevin Costner was cut from or that one of the other stars was in.

I’m in a weird place concerning the film. When the film came out I was in my late teens. I could see that the film was good, maybe even great, but I was not in a place to go orgasmic for it. I would think that I was too young and too inexperienced to get all the nuances. However I’ve seen the film the film at least fifty times in the last 33 years and it never sang to me. Yes it always was a good film, but it never mirrored my life. Was I that different or was it something else?

For me I think the reason that the film isn’t as current as some other films comes fro two places.

First the cast. Where initially these were largely secondary actors and you could accept them as the characters, after the film all of them became stars in their own right. The ability to blend and be real was diminished. This isn’t to imply that they are bad, far from it, rather that when you’re watching the film you’re watching big stars. As anyone knows there is always a danger of stars over powering the sense of place of the film and watching THE BIG CHILL now that’s the case.

The other more serious problem is that 33 years on the film is harder to relate to. Yes, the film relates the disillusionment we all face as we hit middle age and have life make us realize we are mortal, but the characters in the film are special. These are men and women who grew together during the late 60’s during the time of peace and love and flower power. They thought the world would always be theirs and that things, despite Nixon, would be forever sunny. Now some 15 years on that was no longer the case- the dream was gone- really gone- hell, Reagan was in the White House.

Seeing the film now is hard to relate to if you are not of that generation. At no point, other than perhaps he initial election of Clinton or Obama was there ever the sense of anything was possible. Where the various elections brought a sense of hope both were quickly dashed as the politics of the modern word smashed hope and replaced it with fear and ‘us vs them’ factionalism. For anyone who didn’t go to college in the 60’s the utter sense of disillusionment that pervades the characters in the film is hard to relate to. I mean for those my age and anyone younger we’ve had to deal with the disillusionment ever since Trickie Dick, Watergate and the end of Vietnam began the soul crush of the last few decades. People today are disillusioned much earlier. And if they are disillusioned in their 30’s and 40’s it’s only because they realize that partying and video games aren’t the real world.

Does THE BIG CHILL matter?

As a good film and one of historical signifigance yes. But as a cathartic treasure of the cinema no. It’s a film whose time has come and gone, much like the hope th characters felt when they were in college.
Posted by Steve Kopian at January 28, 2016