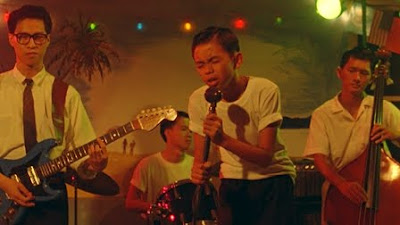 I have been pushing this film for years. Largely lost in the US for the last 25 years the film spent the first 20 years of its existence not playing here. After a stint on the festival circuit it fell off the face of the earth. This despite its director Edward Yang being a cinema darling. It wasn't until around  the time I started Unseen that the film started to come out of the wilderness. When the piece that follows originally ran the film was actually getting a week long run at Lincoln Center. Five years later the film is getting a brief run at the Brooklyn Academy of Music before Criterion releases the film on DVD and Bluray at the end of the month.

If you've never seen this four hour nostalgia trip you should. Its an amazing achievement that sucks you in and pulls you along. Its a film that you get lost in. Its also a film that improves with each viewing which is why the home video release is so cool, you can keep going back to it.

If you've never seen it you should and if you have seen it see it again.

Here now is my original review from 2011

I was going to review this film as part of Unseen’s week of films in honor of Chinese New Year (which is being edited by our own Mr C) in January however the fact that the film has at last secured a US distributor after two decades and will soon be playing theaters in the US has made me move up the review two months.

And yes that is correct, the film has been out for 20 years and never had an official US release. Yes it’s played the festival circuit and yes it plays an occasional revival house (it played both Lincoln Center and the Brooklyn Academy of Music in the last year) but it’s not had a real release.

Actually despite being hailed as one of the best films ever to come out of Taiwan (or for some, one of the best films ever. Period.) the film is damn near impossible to see. I have a copy that I got years ago from Video Search of Miami. It was made from a VCD that has since gone out of print and is also the source of what someone posted to You Tube. As far as I know there hasn’t been a DVD release or at least one in English.

Actually I think the film’s complexity scared many distributors. This is a film that is very much rooted in a specific time and a place. It seems, at least on its face, to be a too complicated film for anyone other than a Chinese audience. However the themes and ideas it contemplates actually reach a much wider audience of people across the globe.

The film deals with the strife that was felt by the Mainland Chinese who moved to Taiwan after the communist take over. The families were uprooted in any number of ways. The parents, their lives very much connected to the past, are forced to deal with the new life in Taiwan. While it’s a Chinese island there was a cultural clash between those who already lived the island and these new people who are now trying to set down permanent roots. Complicating matters, and the focus of the film, are the conflicts of the kids who are adrift between this new world of their family, their friends and this new home, not to mention the outside world coming in through the radio and elsewhere. How the conflicts affect the various characters is the film.

The film is based in part on the what happened to director Edward Yang’s own family when they moved from Shanghai as well as the first juvenile murder case in Taiwan’s history. It is at it’s heart, a very moving story.

For me seeing the film on a big screen with no distractions is the way to go. I had this film for months before I finally managed to see it from start to finish for the first time. The trouble for me was that this is a big story with well over a hundred characters and a historical back story I wasn't familiar with (and thought I should know). It seemed to be a slightly alien viewing experience because I was reading too much into the wrong things , I was looking at the surroundings and not the people. It seemed off and I had to struggle to get into it. I was committing one of the worst sins a viewer can commit and that is not taking a film at face value and trusting it to lead me where I had to go. All I needed to do was just sit there and just watch the film.

To be honest the real problem was that the first five or six times I sat down in my living room to see the film I had to stop because of phone calls or things happening in the house. When I’d go back and try and pick up the film I found I was slightly lost and was replaying portions of the film again to get back up to speed. It frustrated me and it wasn’t until I finally made it from start to finish in one sitting that the film stopped being anything other than a real joy.

I say this not because I want to scare you, I say it because I want you to give yourself over to it. I want you to go and see the film and sit in the theater and just watch it without interruption.(No cellphones) If you can get through that first viewing with your full attention the film will open and up and be richly rewarding…

…actually if you can get about 70 minutes into the film you’ll find it suddenly clicks. Its at that point everything makes sense and you’ll want to go where ever Yang takes you.

I'm sorry I haven't been more detailed in the telling of the plot, but the best way to see the film is to just see it. Trying to simply explain what the film is about and how it unfolds is to kind of sell the film short; besides there is 4 hours of story here. There is simply more to the film than I can hope to tell you in a few sentences.

Do yourself a favor and see this film. It's been rightly hailed as one of the best films you've never seen, and its true. Thanks to a recently signed distribution deal that's going to change and people will finally get to see this wonderful film that has been hidden for so long.

The film's release is one of high points of the film year.
Posted by Steve Kopian at March 08, 2016