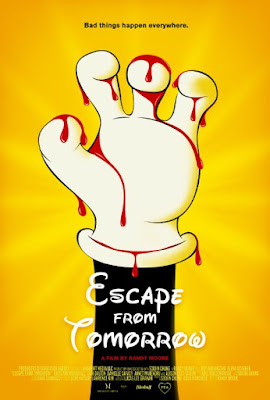 ESCAPE FROM TOMORROW is an interesting footnote film. It’s a film that is more interesting for how it was shot rather than what it is. The fact that the film exists and can be seen is surprising considering that the whole thing was shot without permission at Disneyland and Disney World.

The film concerns a family on vacation at an unspecified theme park. The father’s job disappears but he doesn’t tell his family and they press on. However as the visit unfolds the father begins to become unhinged and it looks as if he may be part of some grand ominous experiment.

As a film it’s an okay little thriller. Engaging but never really tense, the film ends up getting a great deal of slack because of how it was filmed rather than for what it is. Had I stumbled upon the film on cable I probably would have been bouncing between channels while watching it. On its own terms it’s an okay film and kind of stayed with it to the end because I was watching it on Amazon and plunked down a couple of bucks.

Shot in guerrilla style using digital cameras and iPhones the film was planned out in great detail before a frame was shot. The filmmakers wanted to have it down so they looked like tourists and wouldn’t be arrested or thrown out. As it is incidents happened and somehow the film was finished. The film premiered at Sundance and there was little word what it was before it played the first time and sold out afterward. Everyone wanted to see the film which they thought would never get released.

Amazing Disney largely ignored the film figuring that not giving it any publicity would kill it and in a weird way it has. After lots of chatter when it premiered the film kind of has fallen into obscurity because there is nothing to fan the flames after initial explosion. The weird thing is that Disney acknowledges the film in it’s on line encyclopedia with a single line saying it was shot at the park without permission.
Posted by Steve Kopian at March 31, 2016