Nightcap 3/20/15- Boston Underground FIlm Festival, If you have an issue with Unseen, a Tribeca note, and Randi's links 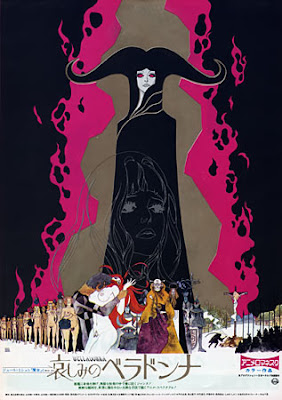 The Boston Underground Film Festival starts on Wednesday and runs through next weekend. The festival looks to be spectacular and had I had a tad more warning I would be making my way to Boston for it.

The Festival is screening what are a lot of great films including the true work of art BELLADONNA OF SADNESS not to mention CASH ONLY which is one of the best crime films from the last five or ten years.

For the full schedule and tickets go here.
---
I am going to ask that if anyone has a question about something on Unseen to email me instead of tweeting me about it. I do understand that the tweet is instantaneous but the 140 character limit makes proper responses difficult. The request is the result a twitter exchange that left me feeling uneasy since trying to answer questions when additional people had been looped into the conversation made giving proper answers difficult in even less than 140 characters.

If there is a problem with something at Unseen I will fix it as fast as possible. If I have erred it is not malicious or anything it is either taking something in a film the wrong way or because editing has gone wrong or a combination of the two. (It appears after doing as much checking back as possible the problem that prompted all of this was a combination of the two with editing and revision sheering off context)

A general note about the way I take notes on films. If I am seeing a screening in a theater my notes are done by hand. However if I am using a screening link my notes tend to be taken on the computer with the notes forming the first draft of a review as I write to link everything up. This essentially means that I obliterate my notes with the first draft. I will not be able to review them.

Additionally if you are asking me about something in a review and want me to go back and specifically let you know why or how I’ve come to a certain conclusion understand that except for daily reports or films that I post about the day I see them, I’m working way ahead. Right now outside of Tribeca I’m scheduled to mid-June. In many cases the details of what I see is retained long enough to write the review and then fades as the next film comes in. If you find me less than forth coming with specifics it’s not I’m being intentionally obtuse, more it’s going to be that you’re asking me about a film you probably just saw when I saw it two or three weeks earlier if not more. I may remember I may not.
---
As most of you know Tribeca is coming and we’re going to be there. However this year there is going to be a huge difference over past years- I don’t think we’re going to be covering as many films as in past years. While I have only seen a small portion of the press screening schedule I have to already remove a large number of the films simply because I do not have the time to get to them. (I would need to lose a half to a quarter day of work to make several days of screenings). I’m sure we’ll be getting to a good number this year I just doubt it will be the massive total 90 of last year
---
And now Randi's links