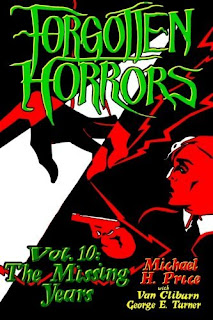 Michael Price's Forgotten Horrors tenth edition may very well be the best book in the series. As some one who has been critical of the series at times, some of the volumes feel to have been put together by rote rather than with love. this edition is an absolute joy.

The book is not a straight on continuation of the series' chronological march of film titles, rather the book is collection of author Michael Price's pieces from various publications, film festival programs and other sources that paralleled the creation of the series. The pieces for the most part all focus on films related to the rest of the series. There are other films covered as well, not to mention comics and music. It sounds like a mess but I assure you it's not. Its a wonderfully eclectic, yet inter-related collection of pieces.

I love this book. I love how it bounces from Val Letwon, to Sherlock Holmes to Robert Crumb to Van Clyburn. There are musings about music and comics and other subjects that initially seem out of place but for anyone familiar with the series will realize the pieces are right on point.

While the book can be used as a reference guide the real joy of the book is just reading the pieces for fun. Price is clearly loving what he is doing and since they were not written to feed the beast of an ever lengthening series he is not constrained by the work a day feed the beast mentality that creeps into straight on reviewing film after film to feed an ever hungry beast.

This is one of my favorite books in the series and it's highly recommended for any film fan, comic fan or music fan since the book covers so many things as to be a good choice for anyone.
Posted by Steve Kopian at December 15, 2016