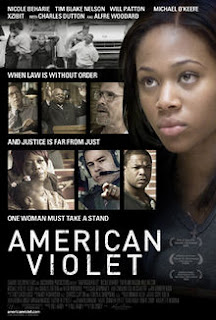 Fact based story of a mother of four swept up in a drug sweep in Texas . She was arrested and held for three weeks on the word of a single informant. She was eventually released and with the help of the ACLU sued the district attorney and the police department who charged her.

A solid ensemble cast (Alfre Woodard, Will Patton, Tim Brook Nelson, Charles Dutton, Michael O'Keefe) is the reason to see this otherwise by the numbers film. Its not that the story is unexciting, rather it's that the script and direction while very serviceable never fully excite the way they should. The result is a very good film that should have been great. Certainly this should not have felt even remotely like a TV movie, something it does at times.

Reservations aside this is a film worth searching out, the cast is that good.
Posted by Steve Kopian at December 03, 2016