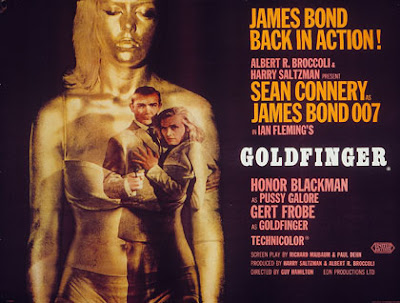 James Bond's third outing exploded and made Bond mania go into over drive. If you ignore the Bond turns lesbians straight subplot, this is a cracking good action/adventure thriller.

The plot has Bond butting heads with Auric Goldfinger. Goldfinger loves gold and he plans to rob Fort Knox. Along the way Bond woos various women including Pussy Galore, Goldfinger's lesbian pilot. Of course there is more to the robbery than a simple robbery.

Full of  I conic characters Goldfinger, Pussy, Oddjob, iconic lines (" you don't expect me to talk" "No Mr Bond I expect you die") and iconic images The gold painted body of jill masterson, Oddjob tossing his hat this is a film that launched a million parodies.  Surprisingly the film still stands up as an exciting piece of fun

... and then they got into heavy rotation on cable and it killed by desire to ever see any of the films again (I still haven't see the last two or three Daniel Craig films)

And then after years of not watching the film I sat don and stumbled on the films on a Starz station and over a couple of weeks I started to watch the films again and fall back in love with the films.

GOLDFINGER works because the plot is intriguing enough that we get hooked early on. The action is first rate and as I said about the characters are wonderful.

The problem with the film is the social attitudes are way out of date. While all of the classic Bond films are sexist, GOLDFINGER's attitude that a manly man can turn a lesbian straight is offensive. It's also so ludicrous as to be screamingly funny. While on some level the better part of me should hate the film because of it, there is a point at which one has to allow old films their mistakes and move on. I doubt the film will make anyone think its sexist ideas are okay, any more than anyone would believe some one like Goldfinger could do what he does or that Bond is a superman. At this point its better to just know the film is wrong and move on. If I got upset about every film that was similarly wrong headed most of our classics would disappear. I can't do that.

Taking it on it's own terms GOLDFINGER is a lot of fun. Just be aware it, like all the Bond films are sexist time bombs.
Posted by Steve Kopian at December 26, 2016