Me, Myself and Her hits on DVD and VOD tomorrow 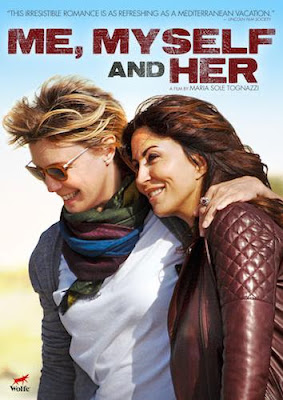 I saw ME, MYSELF AND HER at Open Roads at Lincoln Center earlier this year. This is an absolutely charming romantic comedy that just happens to be about two women.  I highly recommended it when it played then, and now that it is being released to home video I highly recommend it again. (If you want to know how good it is and how much I like it consider I had to resist the temptation to ask the PR people for a DVD copy of the film just so I could have it in my collection)

Here is my original review:

Utterly charming and absolutely wonderful romantic comedy about two women whose long term relationship hits a rough patch just as they begin thinking that everything is okay.

Yes we've been here before.

Yes, you know exactly where its going

But frankly you won't care because it's so beautifully done.

That the film works is due to two things.

First the script which just nails its. The situations are real and the characters are spot on. I love that you could change the sexes of the two leads to anything and pretty much have the film work. The underlying story isn't dependent upon the leads being anything other than being in love. The humor comes out of the situations and not anything else.

The other reason the film works is the cast is perfect. Margherita Buy and Sabrina Ferilli have our hearts from frame one and we're willing to go anywhere with them. They are as good a couple as you will ever see in film these days.

This film is a sheer delight and one of the great surprises-and treasures of the film year.

Me Myself and Her - Wolfe Trailer from Wolfe Video on Vimeo.
Posted by Steve Kopian at December 05, 2016