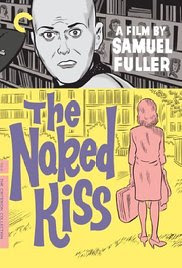 The opening of this film was used by Jim Jarmusch at the beginning of his On Cinema talk at the New York Film Festival. It has a our heroine beating the crap out of her pimp and talking the money owed her. Her wig slips off and she's revealed to be bald. It the first of any number of out there moments as Kelly get out of the game, be comes a nurse, finds a nice guy who isn't nice...

Highly regarded film is ultimately a sleazy piece of exploitation made by a name director., Samuel Fuller. As much as cineastes want to dress the film up, it's no better than any number of similar piece of trash cinema that played in cinemas across America at the same time.  This isn't to sell the film short only to say that the film isn't quite the work of art many have implied it to be.

Were the film not ultimately about a woman who kills a child molester could say that watching the film and it's excesses is fun but the subject matter and the unrelenting oppressive atmosphere makes it kind of difficult to watch. This is a dark film about a dark subject. Interestingly Jarmusch and Kent Jones who spoke to Jarmusch at NYFF kind of made a the twists and turns of the plot into a joke. While most certainly when detached from the film itself it can be viewed as humorous but seeing it in actuality makes it less funny.

Despite the film's reputation and release by Criterion this is more an interesting footnote in the career of Samuel Fuller then a full meal
Posted by Steve Kopian at December 16, 2016