Russia and the Coming Holocaust 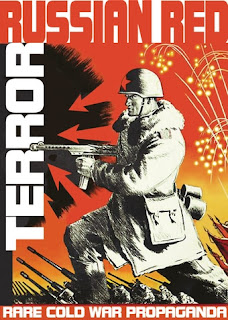 This is a half hour long odd ball short from the early 1980’s that takes a typical red scare stance about the evil of the Soviet Union before swerving into how the godless commies are bringing us close to the apocalypse.

I don’t usually watch red baiting films but needing to decompress during the Tribeca film festival and wanting something completely different I found a DVD of anti-commie films and popped it into the player. I figured it would be a complete brain cleanse and it was. Watching the film I was taken to another time and place some 35 years ago when the Ronnie Regan right wing takeover of America spawned odd ball films such as this.

The film is split between a history of the Soviet Union and is coupled with an former editor of Pravda revealing what things are really like. Its your typical anti-commie stance for most of the films. Then it get weird and turns about the atheistic stance of the USSR. It talks about thr closing of churches and all of that before turning again and getting completely weird and talking about how Biblical prophecy said that the end of the world would be brought about by an alliance between the Soviets and Afghanistan. It’s a supreme WTF moment that had me staring at the screen and replaying the sequence again because it’s just out there.

I love weird mindsets but this is something new altogether.

To be honest on it’s own terms the film isn’t anything special and not worth noting but it’s that final twist that makes this a must see for anyone who likes weird trains of thought- for all others stay away.
Posted by Steve Kopian at December 21, 2016