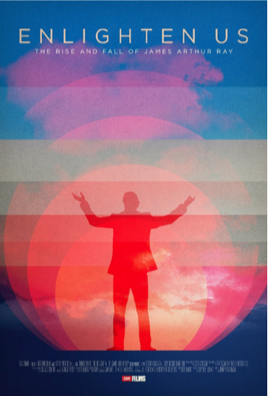 I saw ENLIGHTEN US back at Tribeca. It was one of those films that I saw in the middle of a day long marathon in the middle of ten days of multiple movies. Its a film that managed to remain outside of the gray wash that results when one is seeing around 90 films in a short period of times. Its one of those films that haunted me and danced around in my head and is way more deserving of something more than the capsule it got from me. On the other hand the film was picked up by CNN who is running it December 3 so it, and the issues it raises are going to have a long life. If you can I highly recommend you watch the film tonight or when it repeats. It will haunt you. Below is the piece I posted after seeing it at Tribeca:

ENLIGHTEN US:THE RISE AND FALL OF JAMES ARTHUR RAY is a surprisingly good look at the self help guru who rose thanks to appearances on Oprah, but who lost it all when three people died on a week long retreat. Starting when Ray is getting out of prison, the film the film looks at where he was and where he's going. What makes the film absolutely fascinating is that the film isn't clear as to where it stands on Ray, at times painting him as a nice guy and at others as a bit of a jerk. A must see for anyone who doesn't want easy answers.
Posted by Steve Kopian at December 01, 2016