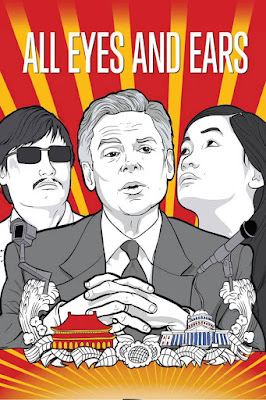 I have a weird relationship with ALL EYES AND EARS in that despite having seen the film in three forms I've never actually seen the released version of the film. The first version I saw f the film was a work print prior to the Tribeca Film Festival in 2015. I was told that the film was more or less done  and could I keep that in mind when I discussed it. I was hard at work on a review when I was sent yet another cut of the film more finished and was told this was a near finished version of the film which I could review... only to get word from a friend who was at the first public screening that the film still wasn't done, and that it was being re-edited to be part of a large multi-part version that included a TV series. I wrote some nice words (but not a review) and I moved on.

Recently I received word that director Vanessa Hope has yet again recut the film from 90 minutes to 75 to make it more on point to be part of the discussion of US China relations in Trump's America. The PR people for the film contacted me and asked if I wanted to take a look at the film. Since I never truly reviewed the film I said yes.

The film focuses on Jon Huntsman, who is appointed as US ambassador,his adopted Chinese-American daughter Gracie who was born in China and the blind Chinese attorney and activist Chen Guangcheng who wants to come to the US and ends up having asylum in the embassy. Filmed over two years the film charts how the two superpowers interact and react to each other in particular through the lives of these three people.

Eighteen months on I really don't remember enough of the first two viewings to tell you about what is missing to say how different the various versions of the film are. To be certain the film moves faster and seems a bit more focused on making a point as opposed to telling a story. This isn't to say that the film is bad but I have the sense that what was lost in the removal of at least 15 minutes of  footage is more a sense of the people to focus on the ideas.

As the film stands now it is a very good portrait of how the two superpowers interact with each other as they knock about the mere mortals that live in them. It does still seem to be trying to do too much by focusing on three people each with a story big enough to have their own film. I went back and rechecked my notes from 2015 and one of the few things I wrote down was "this is good but trying to do too much". I still kind of feel that way, I still would like to see more on the three protagonists over the course of time covered by the film.

I clearly like the film a great deal. One does not  keep going back if one dislikes a film.  As a film unto itself I recommend the film to anyone looking for either an examination of US/China relations or simply for a good documentary. On the other hand if you've seen the film before I'm not sure you need revisit this streamlined one.