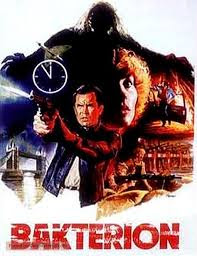 England set Italian horror has a scientist working in a secret lab contaminated by disease hes working on. Stumbling out into the countryside he morphs into a gooey blood sucking monster. When the disease seems to spread the town is sealed off and the villagers are left tp fend for themselves.

Not particularly gory as Italian horror films go this is a reasonably well made thriller more interested in telling a story rather than just grossing people out. While to be certain we have been here before, and while it isn't the best film ever made, it is entertaining nonsense for a rainy afternoon.

While not one of the truly great horror films from Italy it is one of the more more entertaining.
Posted by Steve Kopian at December 19, 2016