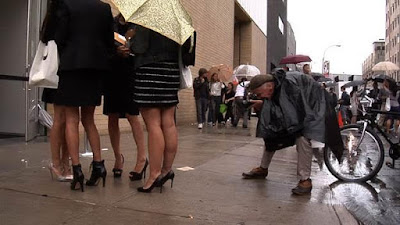 The Museum of the City of New York will launch its new nonfiction film series with a tribute to Bill Cunningham, a New York City icon. Smile, It’s Your Close Up, the Museum’s nonfiction film series co-programmed with Jessica Green and Edo Choi of the Maysles Documentary Center, zooms in on key moments, individuals, and communities to pose the question, “what makes New York New York?” Each program includes an introduction or conversation with filmmakers or other notable guests.

Radiant City presents Bill Cunningham New York (84 minutes, 2010), a look into the life of the legendary street and society photographer that captures the contemporary, modish human flora and fauna of New York’s glittering concrete jungle. Following the screening, attendees will hear from the film’s director Richard Press, Vogue’s Sally Singer, Kim Hastreiter and Mickey Boardman from Paper Magazine, Lana Turner, Bill Cunningham’s subject and friend, and moderator Phyllis Magidson, Elizabeth Farran Tozer Curator of Costumes and Textiles at the Museum, for a conversation in remembrance of Bill Cunningham with those who knew him and his work well. Wine, beer, and popcorn will be served.

$15 for adults | $12 for seniors, students & educators (with ID)
$10 for Museum and Maysles Documentary Center members.

Email ThisBlogThis!Share to TwitterShare to FacebookShare to Pinterest
Labels: mcny, Smile its your close up