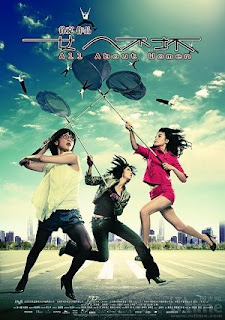 Tsui Hark isn't really the first name that would come to mind when you'd think of filmmakers who'd make a movie about women. After all, he has a long history of making ridiculous action movies, like a couple of the A Better Tomorrow movies and various Jet Li movies (probably the less said about his Jean-Claude Van Damme movies, the better).

Still, All About Women is true to its title (I know the legend is that it was originally called "Not All Women Are Bad"). Co-written with Korean filmmaker Kwak Jae-yong (of My Sassy Girl fame, which I'm sure one of us will write about eventually), it explores the lives of three Chinese women. It is, nominally, a romantic comedy, but the whole "romantic" element is secondary to following our three heroines.

Ou Fanfan (Zhou Xun) is a nerdy, awkward woman in her middle 20s who works at a medical clinic. She has "selective scoliosis" which causes her to go stiff any time a man touches her. Tang Lu (Kitty Zhang) is a femme fatale business woman -- she is powerful in her job and is constantly breaking men's hearts. Tie Ling (Kwai Lun-mei) is a 19-year-old Internet novelist/boxer/musician who has an imaginary boyfriend in pop star X.

The women may seem like archetypes -- the gawky woman who's actually beautiful, the cold-hearted woman who will have her heart melted and the Manic Pixie Dream Girl -- but this movie defies all expectations. While these three women do interact with men and develop relationships with them, it's more about their relationship with each other, with society and with other women. Their romances are secondary to all of that. Instead, it's a striking and hilarious portrait of what it's like to be a woman in the modern world.

I especially loved Tie Ling and her conflict with Mo Qiyan. It's obvious he wants Tie Ling to be his Manic Pixie Dream Girl -- the one who will elevate him out of his boring existence and shake up his world, but she's having absolutely none of it. As much as I love My Sassy Girl, it does feature someone who is a prototypical MPDG, at least at first, so I love this inversion and I love that Tie Ling gets her own voice and arc. Mo Qiyan is pretty much shown to be as silly as he is.

Ou Fanfan is more troubling -- she's someone who develops a pheromone to make men fall in love with her. While she's smart and savvy, her loneliness does get in her way and she's willing to mislead to get what she wants. I appreciate that she's not just some innocent nerd but actually pretty conniving, but ultimately, she's a little selfish and perhaps unlikeable. Still, her vulnerability is genuine and it's hard to blame her for what she does.

Tang Lu as the modern businesswoman is successful, but her emotional emptiness at being a metaphorical man-killer is palatable. She's not someone who needs to be tamed by true love -- she's never punished or shamed for being who she is -- but her change of heart is genuine. She does realize there are more important things than her life than worldly success.

While there is a plot, it's convoluted and really doesn't particularly matter. Tsui Hark handles the slapsticky moments with surprising grace (Kitty Zhang plays several characters and is a fearless comedian). I can see how the more ridiculous elements of this movie might put some people off, but I definitely prefer the aesthetic here to your standard U.S. romantic comedy.

And that's kind of the thing for me -- I don't dislike romantic comedies, but they always seem to present women in a less-than-satisfactory light. Asian romantic comedies often seem to do better on this account -- it's not just about falling in love but how the characters develop as people. I want to see more of that.

All About Women was made by two men, but it understands women's perspective well. If you're put off by the kinds of movies Katherine Heigl typically stars in, seek this one out.