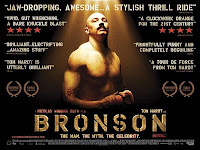 It begins and ends with Tom Hardy. If one wants to know about Bronson, all one needs to know is that Tom Hardy gives one of the best performances you are ever likely to see in anything. Why he was not up for an Oscar I can only blame on the producers not having the resources to properly push the film for consideration. Hell, the film has barely gotten any sort of release in theaters before it was released on DVD.

This is the story of Michael Peterson, who later changed his name to Charles Bronson. He went to prison for a short term in the 1970’s and managed to keep himself there ever since because of his knack for beating up people and destroying property. He was/is considered the most dangerous man in England . It’s said that he has calmed down, giving up his violent tendencies; even becoming a best selling author. That doesn’t mean that he’s still not hated by prison authorities who were beyond angry when a smuggled out message from the man himself was played at the premiere of this film.

The film is told from Bronson’s point of view. He tells us his the story from the start of his life of crime through his now eternal time in jail. It’s a stylized portrait that some have compared to Clockwork Orange. I think that that description only tells part of the story. Some moments are realistic, some moments are fantasy (Bronson in white face talking directly to an unseen audience) some moments are a mix. It's Bronson’s life as he would have us see it.

Its amazing. Yes, its violent, yes it’s nasty, but at the same time its charming and funny. Bronson, the character does everything he can to make himself engaging to his audience. The film creates a duel sense of a guy you absolutely would want to talk with, and yet at the same time he scares the living snot out of you because you never know when he’s going to explode. If the film works, and it does in spades, thank Tom Hardy. Hardy inhabits the role in away that’s scary. There simply is no trace of anyone or anything he’s done before. (Think of his role in Star Trek Nemesis or his roles as Robert Dudley in The Virgin Queen and you’ll be utterly confused) The easiest way to describe it is that Hardy is Bronson. Whether he’s even close to the real deal is irrelevant. He is the character on the screen and that’s it.

I really like this movie a great deal. Its rough and tumble and charming and explosive and silly. I don’t know if it’s a movie for all tastes but its definitely worth a look for those who don’t mind a little bit of violence.

Its out on DVD.