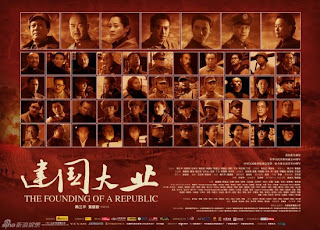 I've been debating posting something on this film for a while now. Its not a bad movie by any means, but I'm not sure its the sort of thing would interest most people who aren't interested in Chinese history. This is one of films that has been produced to celebrate the founding of modern China (Bodyguards and Assassins is another). If what I was told at the shop in Chinatown is correct its the official film on the subject produced by the Chinese government. In that light its clear that its a form of propaganda, but unlike many similar films from government its actually a pretty good film.

This is a huge retelling of what happened in China after the Second World War. Its the story of the battle between Chiang Kai-shek and Mao Zedong for control of the country. Despite some glimpse of battle this is a film that dwells mostly on the politics of the struggle. This is a film that stays firmly with the people involved in shaping a nation.

Its a fast paced tale that moves at a lightning speed through events. The speed is such that the film frequently uses titles to say where we are and who is speaking. Its large scale story that plays out like many of the American war films of the 1960's and 70's like The Longest Day, Tora Tora Tora which play things out in a semi-documentary style. Like those films its both good and bad since it tells the huge story with a great deal of clarity, but its bad since the film contains a great deal of emotional distance since we're simply watching events not getting to know the characters. Who are all of these people? You really don't know, unless you already know the history. It kind of helps that the cast is full of many of China's biggest stars (Jackie Chan, Ziyi Zhang,Jet Li, Tony Lung Ka Fai, Andy Lau, Stephen Chow, Donnie Yen, Vivian Wu to name a few) but at the same time many of them are reduced to little more than walk ons.

I like the film, it's kind of like a documentary on the History Channel with recreations but on a scale and with a budget that would be unheard of on TV. I liked that the film kind of puts the events out there and you can go with it from there. Yes the film has a bend toward its own ends but its still an enjoyable film.

On the downside some of what the film showed me was kind of disconnected to reality and was floating about in space and not likely to stick because unless you know the history already, watching the recreation is going to mean little. Its the problem of having too short a running time for too much information. (I highly doubt that this was ever intended on being seen too far outside of China or Chinese communities)

Can you tell I'm mixed? I liked it, I think its good and I had no problem following what was going on but its sometimes emotionally distant to the point that I don't know if I need to ever see it again. Then again the film has hung with me since I saw it and has forced a long internal debate about whether or not to include as an Unseen Film. After a long battle I decided to include it simply because this is exactly the sort of film that I wanted to spotlight when I started this blog. Its something that is atypical, off the beaten path and most importantly its the sort of thing that people would dismiss out of hand if they weren't adventurous or had been told that it was worth trying.

If you want an "Unseen Film" as defined by this blogs mandate this is it.

Worth a look if you stumble across it, especially if you're a fan of the multitude of stars (but its not something you need search out). If nothing else think of this as the very definition of a footnote film or the one film that makes playing 6 degrees of Kevin Bacon with Chinese actors so much more simple.

This film is currently available as an import from places like Yes Asia and Amazon e-sellers.
Posted by Steve Kopian at March 06, 2010