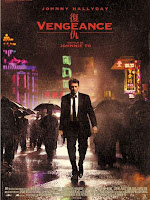 This weekend's Double Feature is one highlighting one of the best filmmakers working today, Johnny To. I don't dare say director since he also produces and writes as well. He is a man who makes films that are interesting even when they crash and burn. Today and tomorrow I'm going to talk about his two of his most recent films, both of which really impressed me.

(And a heads up next weekend I'm going to look at the work of Ka-Fai Wai, who is To's partner in crime and a director in his own right.)


Johnnie To gave me a wild end of year treat (I saw this on an Import DVD on New Years Eve) with his tale of French chef who comes to Macao to get revenge for his daughter. She was shot ,ending up in a coma, while her family was killed in for an unknown reason. The chef, played by Johnny Hallyday, hires three hit men to help him get revenge. The trouble is things are not quite what they seem and complications set in.

This is a wonderfully awkward film, awkward in part as the result of the multiple languages being spoken through the film (the mix of English, French and Chinese require that you see this with subtitles. They also create some awkward speaking performances as people are not always comfortable with what they are saying) and partly the result of the way things unfold. It takes a while for the film to click but once it does the film blossoms into one of the better films of the year.

To be certain there is action and twists galore, but the best thing in the film are the actors. Anthony Wong, Suet Lam and Ka Tung Lam are the men Hallyday hires and they are wonderful. You sense the bond between them. Hallyday is a revelation in a role that is at first simple, and then becomes something more. To say that his stoic face hides many things is an understatement. Not to spoil anything, but what first seems like a kick ass attitude soon becomes something else entirely. There is something going on here and Hallyday pulls it off winningly. Its hands down one of the best performances of the year. You go with the film where ever its going because you like Hallyday and his friends....

...which is a good thing because there are two sequences in the later part of the film that almost derails the film. Both sequences follow in close proximity to each other (one is a weak shoot out in a field and the other is what happens after that) and are going to be the point at which many people either give up on the film or press onward. I kind of gave up, but this being a Johnnie To film and what had gone before was so good I figured that To would pull it out. He did and the film ends with one of the great gun fights of the year.(I blame the sequences on screenwriter Ka-Fai Wai who is one of the best writers in Asia today, but at the same time he often takes things in an odd direction just look at Running on Karma, Himalaya Singh, The Mad Detective or Written By). I think if you're willing to go with the bumps you'll find the film rewarding.

I really liked this film a great deal. For those who like more than just straight forward action this is a must. Honestly there is a great deal going on here and it makes you think as it makes you go wow.

Currently out overseas in theaters and DVD. The film is starting to show up in US theaters as this post appears via IFC Films who appears to have picked up distribution of the film.(Its screening at Brooklyn Academy of Music this weekend)
Posted by Steve Kopian at March 20, 2010