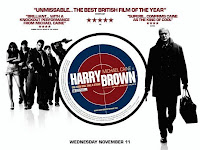 This is the last of the mini marathon of great acting in 2009 reviews.

In fairness I’m not sure this really will get noticed by the Oscars, but it’s a performance of quite intensity that makes you sit up and remember just how good Michael Caine really is.

The plot the film concerns Caine’s title character. He’s an ex-military man living quietly on a pension. He is trying to fill the void left by his recently deceased wife. A friend of his asks him to help with some toughs who are terrorizing him and the people in his block. Unfortunately Caine doesn’t want to get involved. There is a part of himself from his military days that he wants to keep buried. However when Caine’s friend meets with a bad end and the police won’t help, Caine finds that he has to do something. Unfortunately for the toughs involved that involves awakening the darkness inside him.

Okay, if you’re thinking geriatric Death Wish stop. This isn’t that sort of a film. Yes, there is some “action” and yes, Michael Caine kicks butt and takes names. But this is a film with a hell of a lot more on its mind.

As I watched the film I was really thrown off. I was expecting something different then what I got. Much of the film is dramatic. People sit around and talk. Life goes on. Yes, its focused on the story but its not fantastical action and bang bang shoot ‘em up, its an actual developing plot. the film is looking into the problems of getting older, of disenfranchised youth, of the limits of police power and a few other things. There is a real human drama going on here and for a good chunk of its running time you’re going to wonder where the action is. As I said this is not Death Wish.

In its way the film is really just a study of Harry Brown and his life under the circumstances that he finds himself on. Its an amazing tale with an amazing performance by Michael Caine who is pretty much on screen the entire time. Caine’s performance is very real and very understated. There are no grand gestures, no showy histrionics just real close to the vest acting. Its clear from what is said and done that Brown is not an emotive character, his years in the military have taken the big shows of emotion away. Instead there are small gestures, the flashes behind the eyes that give a clue as to what is going on inside. It’s incredibly touching. Its incredibly real. It’s the sort of thing that most actors never would have done. Most actors would have overplayed, they would have made the role showy and outward. Caine doesn’t do that and its why he’s so good, he plays it real. It’s a gem of a performance.

This is a winner of a film. I like that it confounds your expectations, even in retrospect, the film is not what I think it was or should be, its it’s own animal and wonderfully so.

This one is just coming out on DVD elsewhere in the world. Its also just been slated for a limited release in the US.