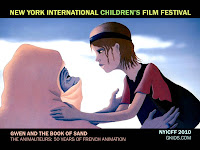 Set in a post apocalyptic world where all the world we see is essentially sand covered. The world is divided into those who live in the desert and those who live in the few towns. Society has slid backward, with a sales catalog becoming a holy book (ala Walter Miller's Canticle for Leibowitz). Gwen lives in the desert and when a friend of hers is carried off she sets out to find him. Along the way she meets up with a strange old woman who journeys with her to the place where her friend has been taken.

It is a stunningly beautiful film. It has been rightly called a tone poem of sorts since much of the film doesn't have any dialog. The film becomes surreal as the detritus of our existence makes for an often surreal landscape for the characters in the film. It makes you ponder what all of the crap we produce will end up as.

The film doesn't really look like any other film, looking more like pastel drawings come to life or perhaps cut paper. Director Jean-François Laguionie has made a film that in its stark way is a work of art. (Having watched 8 of his short films that were included with this film on DVD I think its best to call all his films moving paintings since that is what they most resemble).

I am in awe of the film in many ways.

At the same time I don't know if I need to see the film again, or rather if I need to make a special trip into Manhattan to see it on a big screen so close to seeing it on DVD. Yes, I think the film is beautiful and worth seeing, but at the same time I'm kind of full when it comes to this film and the directors other work.

If you've never seen the film and are a fan of great looking animation, I can't recommend it highly enough. The film is a real treat. (Just be warned, this is not a hopping action packed film)

Currently out only on French DVD. According to THE NYICFF literature the availability of this film in English is very limited.

ADDEMNDUM; December 2019- I can't believe that I never updated this review since I saw the film at the screening and was even more impressed. The film is even more of a stunner when you can understand what is going one. Yes there is still a tone poem but there are deeper resonances. I can't recommend it enough, especially since the film is playing at FIAF's Animation first fest in February 2020 (info here)


Anipages Daily posted a good review of the film
Posted by Steve Kopian at March 12, 2010