In The Attic or Who Has a Birthday Today?(2009) NYICFF 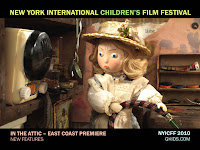 This review was not suppose to be about this film. The review that I was planning on placing in this spot was the film I saw right before this one at the film festival, Mai Mai Miracle. I wasn't really planning on seeing this film because it didn't seem that great. I picked up tickets because I could, but in all honesty I thought that even if I was going to see this film I'd walk out after twenty minutes and go to lunch. Guess what, the much heralded Mai Mai Miracle turned out to be dull dull movie (its a beautifully animated film with a messily constructed story) and this film, which I thought I was going to hate, turned out to be exactly the sort of film that I wanted to spotlight when I started this blog, a great film that no one is going to know anything about.

This is a stop motion animated tale that is best described as Toy Story meets The Princess Bride. As derivative as that sounds, the places that director Jiri Barta goes with it are completely unexpected. Its pure magic.

The plot has the evil Head (a statue of a long gone political leader) getting designs on Buttercup, a doll who lives with and keeps house for her friends, Teddy (a bear), Schubert (a ball of clay), and Sir Handsome (a marionette). Head sets plans in motion to bring Buttercup to The Land of Evil, which then require her friends to race across the attic and free her.

This is just a great deal of fun. There is so much really neat stuff in the film tat you are likely to be like me and many in the audience who were audibly saying "wow" or "Oh cool" out loud. Think about how an attic full of toys and forgotten items might act when no one is around and you'll probably only touch on a small fraction of what is going on.

I wanted so much to hate this film that I kind of kept expecting it to turn disappointing, but it never did. This film simply delighted me with its real world, non-computer animated animated objects. Its so great to see real things really moving around with only the faintest hint of computers anywhere in the film. (If there is anything wrong with the film its that it wobbles in the last 10 minutes, but its minor)

I can not recommend this film enough. This is the truest definition of movie magic.

See this film. I have no idea what the release schedule is for this film is (this was the American premiere) but you really have to keep an eye out for this film. Its magical. As I said in the comment section of the audience voting card for the film, this may not be the best film of the film festival but it is a major find.

(2015 ADDENDUM - The English dubbed version on DVD is terrible. Same film wrecked by a bad voice track)
Posted by Steve Kopian at March 08, 2010