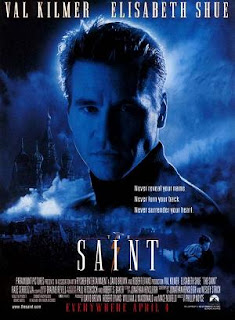 Oh, the late '90s. They were a strange mix of cynicism and optimism. The Internet was a shiny new toy for most of us, and the new millennium loomed enticingly. Music had a glamorous, hard electronic edge and we felt like we were living in the future.

I wouldn't call The Saint a great movie, but it does what it needs to do and it's entertaining. Yes, the science is suspect. Yes, Val Kilmer generally looks like Val Kilmer despite any of his disguises (although I do like that, for the most part, no one is really fooled by them). Still, there's something charming and utterly late '90s about the movie. It captures our pre-millennial fears while highlighting our new-found love of technology, all set to an awesome soundtrack by the time's biggest electronic artists.

It is, of course, based on the previous book, radio and TV series, but other than some obvious motifs, diverts away from its source material. Orphan Simon (Kilmer), who we are introduced to in a sequence with a title card proclaiming "Yesterday," grows up into an internationally sought-after thief, although he pledges to drop out of the game once he makes $50 million. After crossing a corrupt Russian industrialist with political ambitions (really, is there any other kind?) and his bratty, greasy son (who's always carrying a cane for the "cool" factor), Simon is hired to steal the formula for cold fusion from Dr. Emma Russell, played by Elizabeth Shue.

I think the character of Emma holds this movie together. She's a smart woman, and I like that they resisted the urge to nerd her up (so you know, she could be later transformed into a beauty). Emma's maybe a little awkward socially, and obsessed with her work, which makes it plausible that she'd fall for Simon's poetic traveler "Thomas Moore." But at the same time, she's not gullible and she can hold her own. She figures out that Simon's been naming himself after Catholic saints (something that the police couldn't even do) and tracks him down.

Kilmer also works. He's a pretty boy, in some respects, but in other ways, with his slightly buck teeth, he's equally as much of misfit as Emma is. He dresses up as other people because he doesn't know who he is. I think that's a little under-explored here, but the movie is pretty tight at just under two hours, so I can understand there wasn't quite time.

As both Simon and Emma start running from our Russian villains, the connection between them is genuine. Emma's intrigued by someone who'd play her so perfectly (and obviously believes that he has some elements of Thomas Moore in him) and Simon's intrigued by someone who is smart enough to manage to find him, despite his aliases and disguises. The relationship works and holds the movie together. Everything else feels a little secondary to that, and I'm glad of it.

And yes, the soundtrack. We have Orbital performing "The Saint Theme." There's music from Daft Punk, Moby, Luscious Jackson, The Chemical Brothers and Underworld, among others -- it was built as a who's who of late '90s popular electronica. Before the days of file sharing, movie soundtracks were huge, but this was one of the rare ones that suited the film's mood perfectly. It claimed to be taking place "Tomorrow" and the music definitely sounded like it.

There are some things about The Saint that do look silly now -- the clunky laptops, the huge cell phone -- but mostly, everything works. There's a good world that's built in this movie, and it's satisfying to watch.