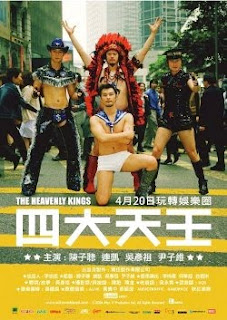 Four Hong Kong actors -- Daniel Wu, Conroy Chan, Andrew Lin and Terence Yin decided to form a boy band, ignoring the fact that everyone except Yin really couldn't sing and they were, for the most part, a decade too old to be considered "boys." Nonetheless, Alive still made an impression and found fame -- playing concerts and getting endorsements.

Except it was mostly all a joke. The Heavenly Kings, directed by Daniel Wu, is one part This is Spinal Tap-like mockumentary and one part Sacha Baron Cohen-esque prank. It's a movie that will keep you guessing as to what's real (the Mona Lisa Bridal Salon ads are) and what's not (the extended sequence with the stylist that eventually dresses the boys up as The Village People is not). It serves as extended commentary on the nature of the Hong Kong star-making machine, and in, a lot of ways, the nature of star-making machines anywhere in the world.

Wu features interviews with several HK pop stars and musicians to get their perspective on the industry and while they're all mostly polite about it, not too many of them have good things to say. And that Wu and his friends were able to pull off this prank also doesn't speak well of the industry either -- mostly, Wu's point is that being famous (as he and his other actor friends were) and good-looking is enough to become a pop star.

Still, underneath the motivation and message, this is a delightful, entertaining movie. The parody aspect isn't overdone. While there's something undoubtedly fun about how they four of them were able to game the system, this story would be nothing if the audience didn't care. All four of our leads are likable and appealing, bringing their own doubts and humanity to this situation. Chan worries about his weight; Yin doesn't want to repeat his previous experience of recording an album; Lin wants to honor the memory of his father and Wu just wants to keep it all together. There's a wonderful arc to everyone's story and it makes the movie more than just a shared joke.

The Heavenly Kings accomplishes the neat feat of being critical without being dour; having a point of view without beating your over the head with it. It's both fun and thoughtful, and that's pretty rare. This movie has stuck with me and I enjoy revisiting it.

(The members of Alive and the founders of Rotten Tomatoes took the AliveNotDead.com web address and turned it into a community for artists. I think that's one of the coolest things to come out of this movie -- they not only pointed out a problem, they've tried to fix it.)
Posted by Eden at March 22, 2010