Eddie Izzard: Live At The Ambassadors (1993) 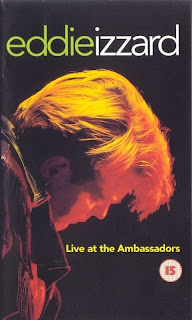 "I've mixed bollocks with bollocks, and it levels out to complete rubbish." - Eddie Izzard

If you were ever interested in seeing how Eddie Izzard evolved his act into the refined bits of loosely scripted material that were his shows Definite Article, Glorious, and Dress To Kill, track down a copy of his first show ever put on home video, Live At The Ambassadors. Filmed during March of 1993 in London's West End theater district, it's kind of like watching a rough cut of a movie, or listening to a demo tape of a band just before they figure out what they really need to make it work. All of the Izzard mannerisms are there, it's just not quite up to snuff. His impressions of both James Mason and Sean Connery (this time playing cows in a scene with the Daleks from Doctor Who...just go with it...) make appearances, but they seem more shoehorned in rather than just naturally occurring. It is rather entertaining watching him try to work out how Connery would impersonate Mason, however.

Much of the self-referential material is there, as are the complete non-sequiturs that he uses when he's come to a dry patch in one bit, and just wants to move on to the next. But although many of what were soon to be standard Izzard traits in his later shows are there, because this overall show seems a little unfocused, they don't produce the laughs that you've come to expect from his other performances. Whereas later efforts like Circle and Stripped had a bit more of a theme to them, Live At The Ambassadors seems so loose and untethered that it's hard for him to choose a path and build to a bigger laugh. Izzard has never been a conventional setup and punchline comedian, and that is already evident here; he just hadn't fully polished the technique by this point.

All that said, it's still an interesting and entertaining show to watch, particularly from a historical standpoint. To see what is basically a "formative years" performance (although his real formative years earlier as a street performer would be incredibly fascinating to watch) is quite a treat. Izzard himself seems to recognize that this is, by his own standards, a sub-par performance, as this has never been officially released in the United States, and has gone out of print in the United Kingdom. Even when a 7 DVD box set of all of his live shows was recently put out, this one, the earliest, was omitted. Worth tracking down for hardcore fans interested in seeing the progression of an artist, but if you are only a casual Izzard admirer, you can give this one a miss.
Posted by Ken Fries at July 12, 2011