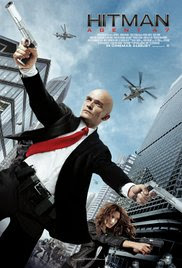 The second attempt at getting a Hitman franchise never clicked with audiences. Despite better reviews than the first film Hitman: Agent 47 failed to go anywhere. I’ve seen the film a couple of times now and I’ve enjoyed it. Certainly it is no worse than many of the more successful film franchises out there.

The plot makes no real world sense but within the confines of the film it makes perfect sense, meaning it’s an excuse for some kick ass action set pieces. The pieces include a battle in a German subway, a battle in a jet engine testing facility, a car chase in a parking garage and a final assault on an impregnable high rise and all are stunning.
Posted by Steve Kopian at December 17, 2017