And now my choices for the BEST OF THE BEST films and film related stuff that I experienced this year. As these are my personal choices (and when you see the notes you'll understand that about a few).  That said these are some really cool films and happenings. 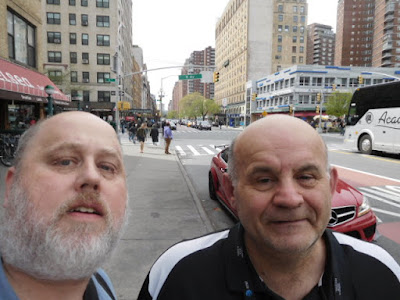 A picture with Sam is probably the best movie picture I took all year. After years of talking Tribeca movies and several failed attempts at getting together to simply take a picture Sam Juliano and I meet in passing outside of a movie theater and snap a selfie before going our separate ways. No plans no great shaking of pillars just two guys recording themselves for an instant for posterity.

All the film festivals this year- Seriously NYFFF, Tribeca, NYFF, DOC NYC, NYICFF, Winter Film Awards, ect ect- you all rocked. The programming truly shined and I had a blast. 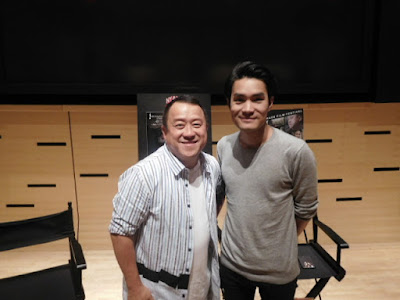 Meeting Eric Tsang was just damn cool. The ability to sit down and talk with Mr Tsang, one the greatest actors and most important filmmakers in the world for fifteen or twenty minutes was a delight. That I got to share it with Jared was awesome- and I envy him since he got got spend more time later that night with Tsang when the New York Asian Film Festival finally gave him a life time achievement award. 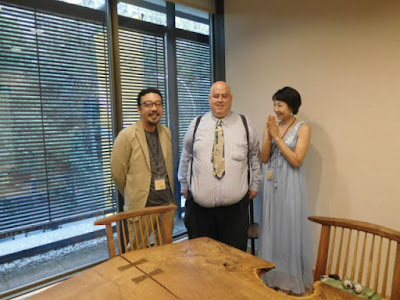 Interviewing Yoshihiro Nakamura and his wife Yumi was one of the greatest experiences I've had since I started Unseen Films. A wonderful discussion of film, neck ties and New York this was one of the rare times when you find out a filmmaker you really like is just as wickedly cool as you hoped. I only wish that I could ave spent more time at the after party that night and really spoke with them some more. 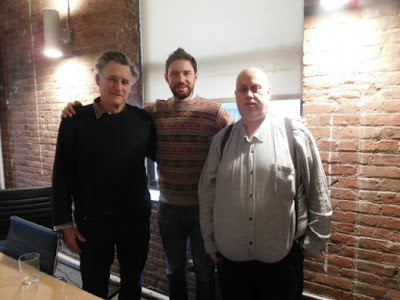 Meeting Bill Pullman and Jared Moshe was the high point of year's end. Pullman is one of the best actors working today and just a cool dude. That I got to spend time with a man who has so many iconic roles, not to mention makes the ladies in my office swoon was amazing. At the same time Moshe is equally cool and someone I'd like to sit and talk movies with.

Being quoted in the trailers for CITY OF JOY and THE DEPARTURE was really cool. I've been quoted in ads and trailers before but when you find that the people behind a film that you truly love love your words it means  so much more than just "hey I'm quoted".

Eric Clapton at DOC NYC delighted me and excited me to no end. I have no idea why. His 20 or 25 minutes introducing and talking after the film for some reason was just incredibly special- probably because so many people I know love him and just being there I was their surrogate.

The Clive Davis film and concert at Tribeca was just WOW. Talk about soundtrack of your life. It was pure magic

The public screenings at the New York Film Festival rocked. From seeing a world premiere Alex Gibney film where he talked about how it was almost not seen, to seeing a film about the building of the Metropolitan Opera House in the Opera house, to seeing PANDORA"s BOX with an orchestra to the Mathieu Amalric Q&A to  watching Spielberg enter the building, to almost killing Randy Newman to hanging out with friends it was just a blast. Why do I go to public screenings at NYFF? because wondrous things happen.

Brooklyn Academy of Music is a joy. I'm not talking their film programming but their programming of things like the Net Wave Festival where film blends with music, dance and theater to create experiences unlike anything we've ever seen. This was brought home two weeks ago when I saw Bangsokol: A Requiem for Cambodia which transcended one discipline to become a transcendent experience. Long live BAM.

The slaughterhouse sequence, especially the ending, in OKJA is perhaps the best concentration camp sequence I've ever run across. The end of it completely and utterly changed my feelings toward the film and made it impossible for me to see the end of the film as happy. I was crushed

LILA- a lovely short film about a young woman sketching and changing the world changed how I saw the world.

LOVE IN IDLENESS- Kim Noce's retelling of part of A MIDSUMMER NIGHT'S DREAM is a visual delight. It is a film I can't shake and can't stop thinking about.

KURO- Greater than the sum of it's parts KURO has haunted me since January. Its a visual story and an aural one that come together to change how you process the world.

RUMBLE-Link Wray and the Native American musicians changed the world and this film shows why and how. One of my top three films of 2017

VALERIAN AND THE CITY OF 1000 PLANETS- love it or hate it film is a comic come to life. While it runs out of steam toward the end te momentum keeps it going- and it has  Rhianna in an Oscar worthy cameo

LIYANA- a group of children come together to tell a story based on their lives.- Its as good as documentary filmmaking can be.

FIX AND RELEASE- turtles are damn near indestructable

LAST FLAG FLYING- clunky plot for sure but the emotional truth of brotherhood, love of country and the moronic nature of bureaucracy transcends all.

FIRST BLOOM- A five minute animated love story of a boy and a princess- think of it as the sort of thing that Ghibli would be proud to claim as their own. I watched it on repeat until my computer locked up

ZAMA- one of those movies that delights on so many levels. While I know people who hate it I clicked with it and its weird vibe and was entranced

ZORN- unfinished look at the composer is a one of the greatest music films ever made- what will this be when it's finished?

KONG SKULL ISLAND - This is the film my eight year old self would have sold his soul to the devil to see. What I originally thought was just a giant monster nostalgia trip revealed itself to be a true cinematic work of art and deeply complex film on repeated viewings

THE DEPARTURE - my pick for the best film of 2017 haunts me to this day. A meditation on life that goes there and back again. It is a mystical religious experience about life and death that moved me on so many different levels.

WHAT HAUNTS US- Movie of the moment reveals in its tale of sexual abuse that we are all guilty of not peaking up. A damning indictment that will leave you broken

LA 92- of all of the films on the LA riots this is the best- and then some. I have no idea how this plays on TV but in a theater with no way to look away, it was a steel toed boot into the genitals and punch in the face. It transcends mere documentary making to become something else entirely

CAPTAIN UNDERPANTS screamingly funny film based on the best selling books made me light headed from laughing. More importantly it had the adults laughing harder than the kids because they could see all the humor

And last and most importantly the absolute best cinema related thing to happen was the mere fact that I got to hang with and talk to and see life with all of the people who have become the Unseen Films Family. As much as I love the movies the reason I share everything I'm doing is so that I can expand the circle of all the great people I call friends with whom I share the darkness, the occasional dinner and the constant conversation.  The best thing in films this year are the people that it has brought into my life.
Posted by Steve Kopian at December 31, 2017