A spoiler filled look at The Last Jedi's problems 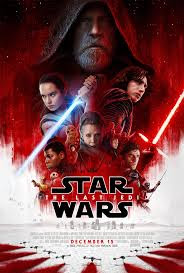 I liked THE LAST JEDI.

I'm kind of surprised to be saying that. The previous film in narrative was okay but it was too tied to the previous films to be it's own thing,.after all how many Death Stars do we need to have destroyed?

Amazingly (for me anyway) the film does provide two truly great movie moments of 2017:

The Rey and Ben battle in Snoke's chamber which is kick ass -until the conclusion. Had Rian Johnson decided to actually follow the surprising turn he could have taken the series into completely and utterly new and unexpected territory- I mean who would have ever seen that coming? Which makes the reverting back to good/bad lines so disappointing.

Of course that would have denied us the second great moment- Luke arriving at the rebel base and walking out to confront Ben. The whole sequence- particularly when he strides out to take on Ben through the burning door - was awesome. It was a supremely heroic moment. Not sure about the ending- but it rocks for most of it.(which seems to be my feeling for most of the film)

In LAST JEDI the new characters step up and arc- mostly. The plot moves things nicely but it is full of holes- worse the film is not the promised middle part of a new trilogy but the end of sequence - which is fine except that if there is another film in "the third trilogy" it's going to effectively have to be a stand alone... or start a new series since things are such that no conclusion can be brought in one film of less than 4 or 5 hours short of cheating... since there is really noting left to conclude.

But I'm getting a head of myself.... Let me throw out some of the problems I have with the film.

WHAT HAPPENED BETWEEN FILMS?
THE FORCE AWAKENS ends with what we had assumed was a large rebellion bringing down another Death Star. The THE LAST JEDI starts with the rebellion almost totally crushed, the remaining few on a small number of ships fleeing their strong hold just as the First Order arrive to smash them.

What happened to all the rebels and equipment?

Seriously - were did they all go?

The film talks about friends in the outer rim and how the rebellion buys their arms making the arms dealers rich- but by the time the film starts they are down to handful of ships and seeming few monied or armed supporters- what the hell happened?

Things get even crazier when you realize that they state that the whole rebellion- THE WHOLE REBELLION is down to 400+ people because everyone gets whipped out when the 30 or so ships are blown up by the First Order.

It makes zero sense- more so when you consider that the rebellion has all these hidden bases scattered around the galaxy- even abandoned- how is this possible? Clearly Rian Johnson didn't think it through he simply fucked with things to tell the story he wanted to tell unaware that there is, or was, a continuity which he flushed down the toilet.

HOW THE HELL DO ALL THE SURVIVING REBELS GET ON THE MILLENNIUM FALCON?
Jumping a head a bit how is it that everyone who flees the First Order's attack get on the one ship- what is the rebellion now the size of a mazurka band? There are supposed to be 400+ less those killed in the attack...and they all flee on one ship - the Falcon. How is that possible?

And he dies? By not seeing his death coming when he supposedly saw everything else? Really? Its cool but its so anti climatic and a waste of a character like Boba Fett or Darth Maul.

Actually my problem with his death isn't how- but he doesn't DO anything before he does. He pontificates- that's it.

WHATS WITH FLYING LEIA?
The ship is hit- everyone dies when ejected into space- but Leia who seems dead suddenly revives and flies through space to safety.

Yes it's nice that Carrie Fisher remains alive but it's the film's one unforgivable sin. She should be dead- Its a cheat and it sucks and I can't really forgive it.

WHY DO THE SPACE SHIPS TRAVEL LIKE OLD SEA SHIPS?
Why are the smaller ships able to out run the bigger ships- with bigger engines? This is space- there is no weight-they are not in an atmosphere- or on the ocean..... its not a matter of maneuvering via the wind at which point I could understand it but flat out flying...

IS MARK HAMILL SERIOUS?
There is this point where I suddenly had the feeling that Mark Hamill was walking through the film. Its as if he was paid a lot of money for one last go - had hopes and then the need to wipe the board of all the original characters made him chafe at how the character went.

He's largely walking through the role not acting in role that makes no sense- and kind of conflicts with what we learn in the first film.

THE ODD MIX OF SMART ASS HUMOR AND PRETENTIOUSNESS DOESN'T ALWAYS WORK
The shifting from deep meaning to jokey humor is uneven. Luke's shifts from brooding to a smile and a wink doesn't always play. Neither does it work else where since it cuts the seriousness of it all. Pick a tone.

LAURA DERN'S CHARACTER NEEDS A BACK STORY
As with the vast majority of this film we don't know enough of Laura Dern's character to feel for her. Who is she? We don't know. Worse what little we do know sparks more questions- like where the hell are the rebel armies she was leading?

She never feels fully formed so her leadership wisdom, even when echoed by Leia, seems kind of hollow. Yes her death is heroic but there isn't anything to give us a hook to mourn her death. She feels more cardboard than a character and she'd be invisible if it wasn't for Dern's personality.

WHY DID THEY BOTHER USING CHARACTERS SUCH AS PHASMA?
Outside of toys- why are they bothering to have characters such as Captain Phasma in the film? They do nothing -or in Phasma's case simply show up to die. Do you need to recall every character from the first film?

THE CASINO SEQUENCE
Its a great sequence but it wastes too much time harkening back to the cantina sequence in the first with music motifs and riffs (not to mention references to so many other films such as Harry Potter) that its distracting.

WHY ARE THE FILMMAKERS RESETTING THE SERIES IN THE MIDDLE OF THE ANNOUNCED TRILOGY?
Han is dead. Luke is dead (though dying a noble Jedi death he can come back). Leia is effectively dead with the death of Carrie Fisher.

For a series that is constantly calling back to the earlier films why the rush to kill off the original characters? I can make guesses but not of them are satisfying.

The film ends and there is nowhere to go but restart a story line. The board is cleared and the ending- particularly with the little kids means they are done. The rebels will rise in a future time.

Had they ended it with Luke standing waiting for Ben to face him- which would have been the greatest cliff hanger in film history-then we would have had a trilogy- then they could have taken it some where. The forced reference to the end of EMPIRE is bogus- there is is nowhere to go other than restart years in the future.

WHAT WAS THE PLAN FOR THIS NEW TRILOGY ANYWAY?
Lucas had a plan for nine films. (Gary Kurtz spoke of the series after Jedi and he laid out what was to happen its on the internet somewhere because I pulled it off a good 15 years ago)

Personally the current sequence (I have to stop saying trilogy) has me feeling that they went in with some ideas and then just winged it figuring that they'd make up the next one at some point- Why they did this I don't know because they new they could do a trilogy and beyond and not worry about box office.

It's been pointed out to me that Rian Johnson flushed the original script for his own. I would love to know what was originally intended since this doesn't feel like it was meant to attach to anything.

I could list more but you get the point... 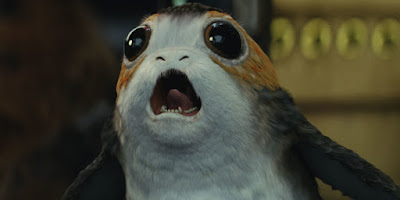 To be honest I completely understand why people hate the film. While I have no problem of where it goes nor anything regarding the individual sequences, the fact is the plotting and the reasoning of the details is a mess. Too much is simply not there, too much is revolves around deus ex machina and leaps of faith.

I completely understand why people love the film since it shakes things up, however illogically, and resets the board. It takes things into a new place.

What do I think of the film?

I like it. Its a good if deeply flawed film in what is becoming an okay and deeply flawed series. To be honest I don't need to see another Star Wars film and I could walk away from the series here because for me the current iteration ended when we saw the small boy standing silhouetted against the night sky so as to look like a Jedi.

Frankly I really don't care for the over all storytelling of the current bunch of filmmakers. To a large degree I really don't care about their vision because it doesn't make me go wow. Certainly it's better than what George Lucas gave us in the prequels, but at the same time the series now is motion and not character. Without character the connection to the the stories is broken and what once fueled my brain with wonder of the vastness of space makes me feel like I'm looking, in large part, at a tourist trap exhibition.
Posted by Steve Kopian at December 27, 2017