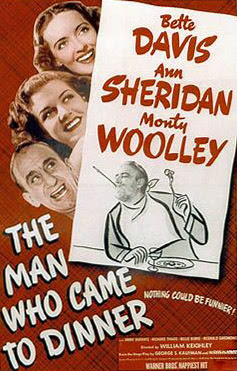 Monty Woolley plays Sheridan Whiteside an acerbic writer stopping in a small town on a lecture tour. A self centered prick Whiteside slips and falls on the steps of his hosts home and ends up stuck in their house for months. As his secretary falls for a local newspaper reporter Whiteside plots to keep her and cause pain to the family hosting him.

Wickedly funny film made Monty Woolley a Hollywood character actor. It was the role he had taken Broadway with. Most amazingly while he is on screen almost the entire 121 minutes of the film he is listed 3rd. Its understandable since no one knew who he was going in but coming out everyone did.

The part is based on literary legend Alexander Woolcott which came about when he took over Moss Hart's home for a day. He and George Kaufmann turned the thought of that one day into an unending visit and had the play. While the behavior is pumped up and done for comic effect one has to pause and wonder what one would do if someone like Whiteside stayed at your house.

The problem with this film version is that until we are about 30 minutes into it Whiteside is a complete and utter ass. Why anyone puts up with him is never quite explained. Worse he is such a monster that you really don't know why he wasn't poisoned.  After the 30 minute mark things settle down and you can just ride the comic situations- and not think about the logic problems.

For me the joy of this version of the story is Bette Davis. Davis is playing against type and turns in a performance completely unlike anything else she ever did. She's so good that you lose track that it's her up there on the screen and not someone else.

The joy of the story whether on screen or stage is the dialog which carries the film from start to finish.

An acerbic delight
Posted by Steve Kopian at December 09, 2017