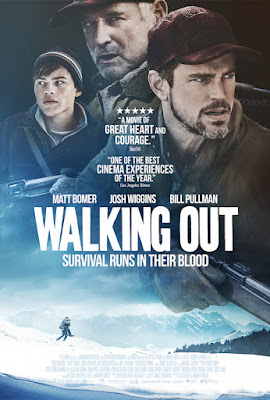 City boy goes to Montana to visit his estranged dad.  While out in the wilderness an accident occurs and the boy must now step up and attempt to save them both.

Good looking adventure coming of age film is pretty good on it's own terms.  Solidly made and expertly acted, especially by Matt Bomer who reveals he's much more than a pretty face. This in many ways this feels like a wonderful short story brought to the big screen.

The film however has two niggling bits that kind of work against it but don't kill it.

The first is that the film feels very much like a short story brought to life. There is a sense of literature on screen more than of life. We can feel the important themes being laid out for us to catch on to.

The other problem is on some level we've been here before. If you done any reading or seen any number of movies or TV shows you've seen a version of this story before. Its not that there is anything wrong with the repetition more that there isn't enough here to set it off from all the other versions.  An hour after the film ended I had trouble remembering any real details.

As is my rallying cry at times, this is another it's not a bad film but it could have and should have been so much better.

Currently in theaters and VOD
Posted by Steve Kopian at December 08, 2017