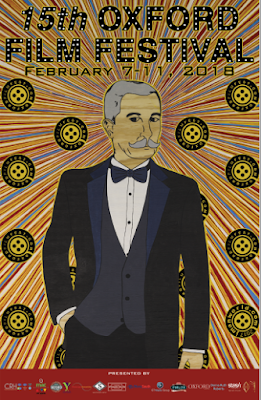 The 2018 Oxford Film Festival announced a special work-in-progress screening of Cassidy Friedman’s CIRCLES, the winners of the film festival’s inaugural screenplay competition and Artist Vodka contest for the 15th Anniversary edition and this year’s Magnifying Glass Fellowship recipient of the popular film festival. Oxford FF also announced the official selections in the feature film, short film, and music video categories produced in the state of Mississippi.

Melanie Addington, executive director of the Oxford Film Festival, said, “In our fifteenth year, the Oxford Film Festival will continue to put our best foot forward when it comes to inspiring the discussion of important and timely socio-political issues and topics through our films. CIRCLES is a great example of a film that provides a wonderful jumping off point for precisely that type of talk. We are also thrilled to debut our screenplay competition and partner with Artist Vodka to continue to not just inspire filmmakers, but offer significant cash rewards for their wonderful work, as well.”

Friedman’s CIRCLES, tracks a Hurricane Katrina survivor who is a pioneer of the Restorative Justice movement in Oakland schools working to keep black teenagers in school. However, when his own son is wrongfully accused, he suddenly finds his personal and professional lives collide. The screening will be co-presented by the Mississippi Humanities Council, and following the screening will be a discussion with Friedman and film subject Eric Butler, in partnership with the William Winter Institute for Racial Reconciliation.

The first winner of the Oxford FF’s inaugural screenplay competition is John Matthew Tyson’s “Twirling at Ole Miss,” and the runner up is John Bateman’s “Not Everything Was Burning.” Both scripts will have a live table read on Wednesday, February 7 at the festival, with the writer of Twirling at Ole Miss receiving $1000, a flight and hotel accommodations at Oxford, and mentorship from John Norris, film producer of such films as Get on Up, The Help, and the upcoming American Pain.

Magnifying Glass Fellowship winner Robbie Fisher and co-director Jenni Smith will world premiere their micro-short with the working title DEAR MR BRYANT on Wednesday of the festival. Fisher received $1,000 to have her film made.

Liam Hendrix Heath’s NATION DOWN, which depicts a nightmarish world ruled by a manipulative king risking his rule in a warped bid for companionship, won the Artist Vodka competition. Heath will receive a grand prize of $5,000, along with flight and hotel covered to attend the festival. Tracy S. Facelli’s FAVORITES, about a man coping with the sudden death of his wife via the happy memories brought about by eating his favorite dessert that she had made for him prior to her death, was the runner up in the contest. Facelli received hotel accommodations to attend the Oxford FF as part of her prize package. In order to be eligible for the competition, the films were required to be less than 25 minutes and must incorporate one of the following:Artist Vodka mentioned verbally, a character wearing an Artist Vodka t-shirt, placement of Artist Vodka bottle in foreground in a scene, or the Artist Vodka logo in the opening credits.

Addington added, “The Oxford Film Festival has always had a clear and dedicated objective to promote and celebrate the work of filmmakers local to Mississippi. Giving those filmmakers an opportunity to show their work and be discovered by our audiences, as well as make connections with other filmmakers leading them to future work has been one of most important aspects of this film festival for going on fifteen years now.”

Four feature films will lead the way for Mississippi-based productions chosen as official selections for the 2018 Oxford Film Festival. Those films include Jeff Dennis’s THE PROCESS: THE WAY OF PABLO SIERRA about a potter, baker, and horseman who lived in Yocona, Mississippi. Born in Spain, Sierra came to Ole Miss on track scholarship, eventually becoming the man he is today. Astin Rocks.’ LOVE SOLILOQUY: A VISUAL ALBUM uses avant-garde storytelling to reveal the psyche behind young women navigating their relationships. Timothy Givens and Mark K. Brockway’s MISSISSIPPI MADAM: THE LIFE OF NELLIE JACKSON profiles an African-American woman born into poverty in Possum Corner, Mississippi, who opened a brothel in Natchez, Mississippi and ran it for more than 60 years with full knowledge of police and Natchez officials until a fiery end one hot July night in 1990. Frances Causey’s THE LONG SHADOW features two daughters of the South who look beyond their white privilege to discover the troubling and hidden history of their area, exposing the long and powerful reach of Southern politics.

A Hurricane Katrina survivor who works to keep black teenagers in school in Oakland, California finds his personal and professional lives colliding when his 15-year-old-son goes to jail for a crime he didn't commit.

On a strange world locked in a dystopian nightmare, an oppressive regime is met with riots and rebellion. Desperate to suppress chaos, the king triggers a perverse manipulative scheme before risking his dominance in a warped bid for companionship.

Steve and Natalie are pretty happy together, until it all comes crashing down when Natalie dies unexpectedly. After the funeral, Steve is having some trouble processing until he finds that the last thing Natalie did before she died was to make his favorite dessert. With this last push from Natalie, Steve starts the grieving process.

“Not Everything Was Burning” (Runner-Up)

THE PROCESS: THE WAY OF PABLO SIERRA

A film about a potter named Pablo Sierra who lives in Yocona, MS. Born in Spain, he came to Ole Miss on track scholarship. He became a world-class runner, and is now a potter, baker, and horseman. For Pablo, the process is everything.

In 1902 Nellie Jackson, an African-American woman born into poverty in Possum Corner, Miss., travels north to Natchez and opens a brothel she ran for more than 60 years with full knowledge of police and Natchez officials until a fiery end one hot July night in 1990

Two daughters of the South look beyond their white privilege to discover a history that’s been hidden, exposing the long and shockingly powerful reach of Southern politics from slavery through to today’s racial imbalance.

A concerned citizen shares her young thoughts on the orange invaders that have enveloped her town.

A typical closing shift for a barista turns as he is preparing to leave for the night.

A cowgirl from Mississippi pursues her lifelong dream of becoming the first African-American female in the National Finals Rodeo.

Missing lunches, maniacal villains, monster detectives, and mechanical men: When office life gets boring you can always escape to the streets of Cubicle City.

A man with a gun wakes up alone on a cliff. Out of boredom, he shoots at a tree filled with birds, who attack him in response, before leaving him isolated on the cliff, after he shoots and kills several of them. Realizing his actions were wrong and that the birds were his only company, he seeks to regain their trust once again.

Does Mississippi's state flag, adopted in 1894 and the last in the United States to incorporate Confederate imagery into its design, represent hospitality or hostility? To some it depicts history and heritage; to others it stands for a history of hate and injustice. The discourse over the flag often becomes so contentious that the debate quickly devolves into a shouting match. FLAG FLAP OVER MISSISSIPPI is a filmic conversation between all sides that will hopefully generate more civil discussion in the public sphere.

Greg Harkins has lived in Vaughan Mississippi for all of his life. At an early age he began studying the craft of woodworking and since that time he has never worked for anybody else. His techniques are passed down from the mid-1800s and he is preserving a virtually lost craft.

Little Kevin watches his dad try to keep the family together after mom comes home... changed.

Joseph Hosey delves into the history, both natural and societal, of his home through wild foods. Foraging offers both a method of understanding and a way of belonging in Jones County, Mississippi.

The piper takes revenge on a town that owes him for his services, but soon realizes he has made a grave mistake.

The behind-the-scenes story of how a newsletter written on a coffee table grew to become a multinational publication read by tens of thousands all over the globe.

John Ruskey came to Mississippi to discover the blues. After repeatedly seeing the town of Clarksdale on most of his blues records, he packed his bags and went south, guitar in hand. After years of living in Clarksdale as a blues historian, he suddenly had another calling. This time, it was the Mississippi River (or the "gut of America" as he likes to say). John and his lead guide, former college All-American and NFL linebacker, Mark "River" Peoples paddle down the Mississippi River on exploratory adventures year round. Their goal is to change the misconceptions of the river while leaving their fellow explorers with lifelong lessons.

WE BELIEVED WE WERE IMMORTAL

On the 55th anniversary of the 1962 crisis at Ole Miss, author Kathleen Wickham traces the footsteps of twelve American journalists and examines the unsolved murder of Paul Guihard, a French reporter, the only journalist killed during the civil rights movement.

Jimmy Gregory survived being hit in the head with an ax as a teenager.

“A Hard Rain” by Stacie and Cassie


“Make Me Want You” by Shayne Weems


“Royal” by Lost in Constellation


“Spinning” by The Fuzzy Crystals


“Your Mistress” by Mersaidee Soules

To learn more about the films, buy tickets or passes to the festival, visit us on Elevent.

This post is made up of information pulled from the Oxford Film Festival Website
Posted by Steve Kopian at December 05, 2017